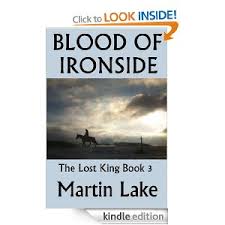 Once more into the fray as Edgar continues his struggle to reclaim his throne from William the Bastard(or Conqueror depending on your point of view).  What is most intriguing to me at least in this series is the historical fact that we know that William wins in the end, yet the author provides us with the hope, forlorn though it may be, that maybe Edgar can be successful.  He is certainly determined enough as there are numerous occasions for him to just throw in the towel and submit to William or to just head elsewhere such as Constantinople.

In this volume, the author has Edgar confronting not only his failures but also the internal process of what kind of King would he be.  Edgar grows much in this part of the story as he grapples with the lessons he learns about kingship and the power derived from that position and also the limits to that power.

One of the aspects of writing that I feel the author does well is character introduction and development as there is a host of great characters that fill up these pages.  Edgar has a core of followers that include outlaws, nobles, reluctant thugs, Counts and Kings.  He also has a host of enemies, so many in fact that I liken Edgar to some half dead warrior surrounded by a flock of carrion crows and vultures just waiting for the chance to finish him off.  That he survives to continue the quest is a testament to his character and to his friends.  He is certainly the most likable tragic figure I’ve come across in a long time.  I highly recommend this series and hope that Martin Lake doesn’t wait too long to give us book 4.  I rate this at 4.8…well done Martin.