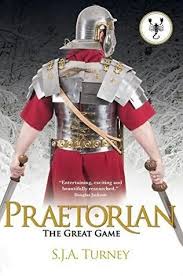 Wow, this is sure exciting stuff.  Who would have thought that me, a humble yet insightful reader and reviewer of books, would make it to the most prestigious blog tour of SJA Turney?  I have known Simon for a couple years now, a relationship brought forth through the great bringer together of old friends and maker of new ones, social media.  In fact, it is his fault I have a Twitter account.  I had finished reading Marius Mules IV and noticed in the About the Author section that Simon listed his Twitter handle.  Well, I enjoyed the first four books in the series so much I just had to tell him and @hooverbkreview was born and began what has become a pretty cool network of authors, reviewers and other fellow travelers.  Soon I had inveigled my way into his confidence and got on his list of beta readers which is really nice because I get a signed copy of the books and I know that they will be worth a small fortune at some point in the future.  So if my writing career doesn’t take off then I have those signed editions to fall back on in my retirement and now I’ll have one more as I have just finished his latest, Praetorian: The Great Game.

Where to begin?  The protagonist, Rufinus, the depth of scenic detail, the mesmerizing plot twists?  That sounds like a logical order to proceed with.  Rufinus is your average legionary doing the foot slogging, shield walling duties of a Roman soldier all for the glory of Rome and the Emperor Marcus Aurelius.  Then in one of those ‘no good deed goes unpunished’ moments his life takes a radical detour.  Without going into too much detail as to not spoil it, Rufinus is promoted to The Praetorian Guard and is subsequently posted undercover at Commodus’ sister Lucilla’s villa.  From then on he finds out just what kind of man and loyal soldier he is.  He is tested time and time again managing to emerge stronger as a character after each ordeal, physically, emotionally and rationally.  A fascinating character developed beautifully by the author.  That holds true for the rest of the cast of characters as well.  The two Praetorian Prefects, Paternus and Perennis, the dark and visceral Dis and the savage beast called Tad are just a few of the more interesting players.

I have found over the past few years that Simon has a great ability to transport the reader to the places he is describing, whether that is the Emperor’s Palace in Rome, the various monuments and temples but most especially the Imperial Villa at Tibur.  I felt as if I was walking the grounds taking in the opulence of the imperial sections, the contrasting slave quarters and even the hypocaust system.  This descriptive flair is also evident in his turns of phrase.  For example an exclamation uttered by one the characters: ‘by the seven sacred shits of Jove.’  Or when after setting the scene with a gate guard suffering from intestinal distress meeting Acheron, Rufinus’ hound from Hades.  The result: ‘The guard’s bowels surrendered.’  Maybe it’s just me but I burst out laughing when I read those tasty tidbits.  🙂

The pace  of the story moves along readily and builds to an exciting climax and has within it moments when I would pause and say ‘okay, I didn’t see that coming.’  Rest assured that you will be entertained and maybe even educated a little about the world of Gnaeus Marcius Rustius Rufinus.

I vow by the seven sacred you know whats that this is a 5 star winner.

Let’s all give a big Hoover Book Review welcome to today’s guest, Simon Turney.  Welcome, Simon and thanks for taking the time to answer a few questions from this humble yet insightful reader and reviewer of books.

Oooh…. Exciting! Yes, definitely exciting. I’ve long believed it’s my strongest novel and that it would be well received, and I’ve been dying to let readers see it for a long time (Oo-err!) It’s like having an amazing hat but only being allowed to wear it in private (weird analogy? You bet!) It’s been a long road for Praetorian and it’s not quite the book in started as, largely due to the talented editing of my agent Sallyanne, who turned it from a lump of quartz to a diamond. But the very best thing about it being out there? I have had the plots for books 2 and 3 sitting in a folder on my PC for a year now. I’ve even done the research trip, taken the photos and investigated the locations for book 2. I’ve been ready to write it for more than half a year, but it’s not been worth launching into until book 1 was in publication. Now… I can start on book 2 (working title: The Emperor’s Man)

Funnily enough, this is to some extent the subject of a guest post I did a couple of days ago for https://forwinternights.wordpress.com/ … I’m a great believer that a scene in a book feels a great deal more real if the author has put their heart and soul into the location, and the best way to do that is to experience the place yourself. I try and visit every location I use (it’s not always possible, but I do my best.) When I visit a location, first of all I have my camera to hand at all times. I take a lot of photos. That means that when I come to write about it, probably months later, I can refer back to see, for instance, whether one building is visible from another, and such like. I also pay attention to smells, sounds, terrain and wildlife. Are there terrapins in the pond? Do you break into a sweat on the angle of approach? Is there the scent of jasmine in the air? These are the things that bring a location to life. Of course, the amount of detail you throw into the scene is a fine line too, since loading it down with too much can impede the pace, but a good description turns a scene from ‘mmmm’ to ‘wow!’ Because of the different senses I need to record, as well as my camera, I carry a dictaphone, on which I keep seemingly endless notes.  I am careful enough in selecting locations that it never takes long for inspiration to strike. If I cannot see the scene in my mind’s eye within minutes, it’s the wrong location! As for the bringing to life a long-dead site, I would suggest readers pop over to forwinternights and read the blog I posted, which goes into some detail on that.

Oh yes. In fact, while it’s nothing to do with battle, there is a torture scene in Praetorian that is a vastly toned-down version of the original. My editor suggested I cut it down and she was, in retrospect, correct. Even now, going back over the original makes me wince and makes my eyes water! Similarly, in The Pasha’s Tale, which has just undergone its final edit, I have completely removed a scene in which a household of civilians is cut down. It was, in the end, seemingly too much for the tale, and so joined so many other scenes in ‘File 13’. Oddly, I don’t think I’ve ever toned down a battle scene. Battle is in its very nature brutal, and those people who are reading a novel about the legions at war are almost certainly expecting such vicious description. In fact, some of my readers have expressed disappointment at lack of violent bloodshed from time to time. What I am turning away from more often is non-battle brutality, since scenes like that are far more shocking and unpleasant.

Simply: I have no idea! I have a peculiar imagination as anyone who knows me will verify. I tend to be very inventive with my phrases even at home. I have been known to shout things like ‘Turdhoney!’ when I drop an egg on the pantry floor. Words just fit together so well into odd phrases even if they shouldn’t. More so, if they shouldn’t.  I trained with the best, mind. My German housemate at University initiated the phrase ‘suppurating, buggering heck!’ which remains one of my faves. Cursing and swearing can be horribly offensive and it irritates me to hear people using gratuitous bad language out in the streets. But somehow the offensiveness of an imprecation is inversely proportional to the humour within. If what you shout when you drop a rock on your toe is odd or funny enough, people will laugh rather than taking offense.

Hmm. I nodded to this with your first question, didn’t I? There are years of fun ahead for Rufinus. For a start, books 2 and 3 will see him variously at the family estate in Hispania, in southern Gaul, in Rome and Ostia, and even out in the wilds of Dacia (modern Romania.) There are still an array of dangerous men in the Roman court, including a couple of well-placed men whose actions will change the course of Commodus’ reign. Be sure that Rufinus has a part to play with them. And over in Dacia sometime soon, two future usurping emperors are busy. Book 2 is already planned down to a chapter level ready to write and book 3 is a nebulous plot at the moment. Beyond that? Well, the sky’s the limit. As with Marius’ Mules, as long as people want to read about Rufinus, I’m happy to write about him.

I am just putting the finishing touches to The Pasha’s Tale (the fourth and final installment of the Ottoman Cycle) which I will publish once the cover is complete, with a tear in my eye as I say goodbye to writing about 15th century Istanbul. Next week I begin work in earnest on Marius’ Mules VIII: Sons of Taranis, which I am already champing at the bit over. That should be out in the late summer this year, all being well. After that, sometime towards the end of the year, it is the turn of Praetorian book 2. In the meantime, there are three side projects already written and waiting for publishing, including the joint work with Gordon Doherty, which is one of my favourite things I’ve ever written. Shortly, we are going to embark on book 2 of that series too. All go at Chez Turney as you can see! Never a dull moment.