It has been too long since I read book one of the Soldier of Rome series, so long, in fact, that when I did read it I wasn’t blogging book reviews.  The Sacrovir Revolt was thus a pleasant reunion with Artorius and his mates as they proved their mettle once again.  In this edition, a group of Gallic nobles decides to take on Rome and throw off the yoke of subservience they have felt for 70 years or so.  The author provides a thrilling ride  that gives a glimpse into the lives of not only The Legions but also a look into the Tiberius run empire; in particular the aftermath of the murder of Germanicus.  I found this part of the story very interesting as the main characters (Tiberius, Agrippina, Piso, Sejanus, etc.) are portrayed in a slightly different manner than the I, Claudius version of Robert Graves…this is not to say there aren’t similarities but enough of a difference to pique my interest.  James Mace has a good feel for the structure of a legion and the attendant activities of those in command; on every level.  The plot for the rebellion is well done as are the confrontations between the combatants.  All in all this tale is an exciting read and I will be continuing on, though hopefully with less of an interval that I had between books 1 and 2.  4 stars 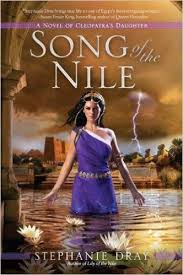 Cleopatra Selene, daughter of Mark Antony and Queen Cleopatra is once again marvelously portrayed by Stephanie Dray in the second book of this trilogy tale.  The author is on form as she brings the child of book one into a woman driven by the prospect of becoming Queen of Egypt and restoring Isis to prominence.  Of course, in order to reach those lofty goals she has to contend with a devious Augustus and his take no prisoners wife, Livia.  The story is mostly set during Selene’s reign as Queen and wife to King Juba of Mauretania and details her struggle to maintain the legacy of her mother while learning the dos and don’ts of statecraft and dealing with the maddening antics and commands of Caesar Augustus.  The author has given us a tale full of intrigue, hope and desire.  It’s a dangerous game trying to outfox a man determined to add to his power over the Roman world and his determination to protect his legacy and the future of his family’s role in ruling the world.  The tale is also replete with some surprises, both good and bad, yet Selene finds the strength to persevere in a world where she is often misunderstood by those who want to bring her down.  I am looking forward to the finale.  5 stars. 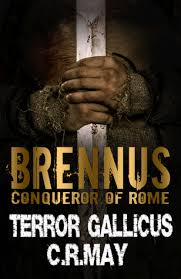 There were many migrations throughout the history of Europe.  This is the story of one of those tribal moves, The Senones, as they made their way from what is now northern France to the Adriatic Coast of Italy.  It is early 4th century B.C. and The Roman Republic does not take kindly to incursions into their territory.  Conflict is inevitable.  This is also the story of a young Druid, Catumanda and a young Senone, Solemis, the son of the Horsetail Clan chief.  What C.R. May has done in this wonderful tale is a great example of taking the historical record, scant though it may be, and producing a convincing re-creation of an ancient time and place.  The characters are highly developed, the scenic backdrop created in such a way that the reader can visualize crossing The Alps with Brennus or making the sea crossing with Catumanda, the action is portrayed realistically, and the pace of the book makes it easy for the reader to lose track of time and possibly losing some sleep.  Suffice to say that I enjoyed the journey through a period that is pivotal in the annals of Celtic/Gaulish history and is sure to be pivotal to Rome as well, but we’ll have to read book 2 for that part.  🙂   5 stars

Pompey the Great – I think the first time I heard or read about this remarkable Roman was at the tail end of the movie Spartacus.  Of course in that scenario he was vastly overshadowed by the greed driven Crassus (who. come to think of it, reminds me of Donald Trump).  From that initial recognition of his name I had to wait until Colleen McCullough’s magnificent rendering of the Marius through Gaius Julius period of Roman history to be fully introduced to this incredible, yet unlikely Roman icon.  In Magnus – Rising Sun, Robert Allen Johnson brings to life the beginning of the story of Pompey’s ascension to the pantheon of Roman greats.  His is an unusual climb up the ladder as he is given commands that are usually reserved for serving Consuls or Senators, yet there we find him, a mere boy raising his own army to serve Cornelius Sulla.  The author kept me glued to the pages with his storytelling and his knack of making his characters ring true to the historical record.  The speeches, for example, that Magnus delivers to his legions convincingly portray him as a General who cares more for his men than he does for his glory…at least until Sulla tries to deprive him of his men and that glory.  I found myself extending my reading sessions of this book far longer than I intended and was immersed to the point where I would neglect that nice hot cup of coffee until it had turned cold.  Halfway through Rising Sun I picked up book two in anticipation of another fine read.  4 stars

In my travels through the magical medium of historical fiction, and most especially in the last year or so, I have encountered some wonderfully crafted female characters.  To name a few, but certainly not all; Eleanor in the Feud series by Derek Birks, Selene in the Daughter Of Cleopatra books by Stephanie Dray, Giulia Farnese as portrayed in Kate Quinn’s Borgia series, Alice Petherton in Martin Lake’s tales of Henry VIIIth, Patsy Jefferson by the duo of Laura Kamoie and Stephanie Dray and now added to the list, Anna Belfrage’s Kit.  The story takes place during a revolt led by Sir Roger Mortimer against King Edward and his principal advisor the twisted, reprehensible Hugh Despencer – he ranks as one of the more disgusting creatures I’ve encountered in literature – though he is but an example of the author’s gift for characterization and development.  It is a story of how a man sees his honor and his loyalty to his liege lord as more important than what he knows will be the result of that honor and loyalty. Weaving through that tapestry of lost hope, physical pain and fearful dread, Kit finds the formidable woman inside and withstands the many misfortunes that fate has strewn in her path.  From a girl, kidnapped and forced to assume the identity of someone else, to a woman filled with a love strong enough to endure.  The author breathes life into the time, the place and the conflict…the reader feels that they are a part of the weaving, that they are walking the fields and courtyards, are experiencing the wretched prison cells, are transported by moonlit nights of romance.  Hoover Book Reviews awaits the sequel.  5 stars