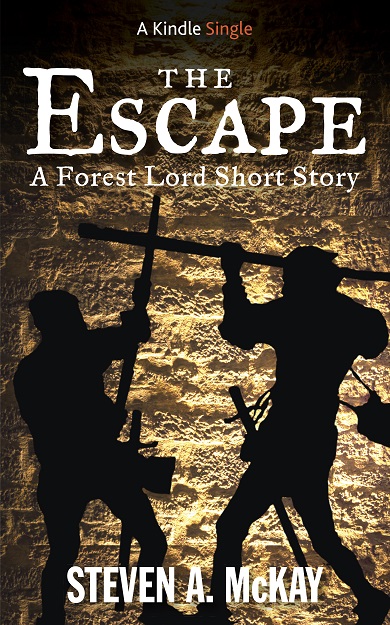 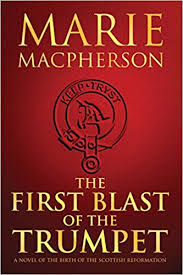 I attended Knox Presbyterian Church in Detroit, MI when I was young; indeed it was the church in which I was married, so, reading about the life of John Knox seemed like an interesting thing to do.  What I found, in The First Blast of the Trumpet, was far more than just a historical fiction biography.  Scotland in the mid-16th century was filled with religious and political turmoil.  It was an era of burgeoning church reform; building on the Lutheran reformation in Germany.  It was also a time when Henry VIII of England wanted Scotland for his own.  In this turbulent atmosphere the author has produced a wonderfully crafted tale; one that propels the reader into a world where the Church is beginning to lose it’s grip on the populace; a world where Scotland is struggling to maintain its independence; a world where the reader experiences life in a Cicstercian Abbey.  While this is the story of John Knox, the main character in the first book of this trilogy, is Elizabeth Hepburn, Prioress of St. Mary’s Abbey.  I fell in love with Lisbeth right from the start, a jaggy thistle with romantic dreams but whose future was not hers to control.  As the story progresses and the jaggy thistle grows up, Elizabeth becomes what was a rarity in a male dominated society; a strong woman able to defy and even defeat her male counterparts and overlords.  Yet, she is also a woman troubled by that romantic streak she maintains in memory and even in hope.  The story is also full of the dramatic tension between the corrupt officials of the Church and the reformers.  John Knox was destined for a life in the Church but doubts about the teachings of the Church and the influence of others leads him to turn his back on the Church and by extension his Godmother, Elizabeth.  Naturally, the Church responds viscerally as heretics are now burning for their sins.  This emotion packed look into the early life of Knox; this tale filled with unexpected turns; this work replete with characters who draw you into their world, comes with Hoover Book Reviews highest recommendation.  4.8 stars

P.S. I would be remiss if I didn’t mention? forewarn? my peeps and fellow travelers of the enchanting use of archaic Scottish throughout the book.  I jalouse you may want to keep Google nearby if you want to ken the meanings.  🙂 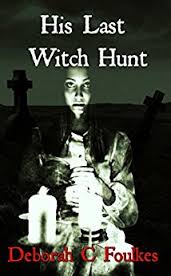 An intriguing tale that takes place during the English Civil War about The Witch Finder General, Matthew Hopkins.  The village of Hopton is shaken by a death and witchcraft is suspected as the cause.  Matthew and his crew find themselves embroiled in a very confusing situation compounded by many factors that make this case very difficult for all involved.  The author does a fine job in rendering the hysteria, the fear and the hatred that the villagers feel towards the accused.  The characters are portrayed in a way that takes the reader into the mindset of this unfortunate time period of inquisition and religious fanaticism.  The story starts out to be a straight forward example of a superstitious accusation but the author entwines other human frailties and emotions  into the mix making for entertaining plot twists.  This is certainly a page turning delight to read.  4.3 stars 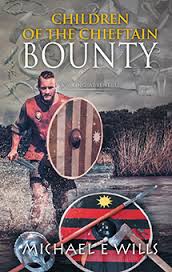 The third installment of this engaging series finds Ahl Brightsword continuing to tell his story.  The crew of The Eagle are still trying to gather the riches needed for them to return home and end their banishment but are co-opted into a fleet carrying warriors to help the Greek Emperor at Miklagard defend against an invasion.  The story moves quickly and is filled with action, drama and a wonderfully descriptive narrative; especially the portaging of ships overland to avoid dangerous rapids. I highly recommend this book and the series to young readers who are interested in the history of that period; and who doesn’t like good Viking tales?  🙂  4 stars 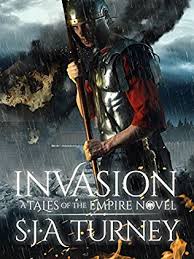 If there’s one thing I’ve learned after reading so many of Mr. Turney’s works, it is that to expect the unexpected.  In this the fifth volume in Tales of the Empire we find the Empire invading the isle of Alba; it is reminiscent of Rome in Britain but with enough plot twists to keep the reader guessing as this invasion is fraught with much more than just battles between 3 legions and tribal warriors.  As in the previous four volumes in this series, we are introduced to a whole new set of characters and with the action mostly on Alba, a new location.  Once again, the author shines as he creates his characters with a wide range of personalities.  The three tribunes are a good example of that as each one has something different about him to bring to the table.  Of nasty specimens be assured that there are plenty and they are wonderful additions indeed. The reader also gets to enjoy the imaginative descriptive prowess of the author as he paints a vivid picture of the surroundings and the hill forts; especially the fortress of the Queen.  Another winner for Mr. Turney; that’s also to be expected.  🙂 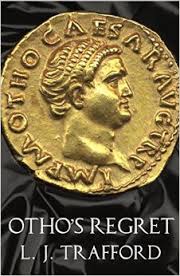 To quote the band Queen, “Another one bites the dust.”  Rome is going through emperors faster than Lincoln went through generals in the American Civil War. In fact, it is going through them so fast that Vitellius thinks he’s supplanting Galba who’s already been supplanted by Otho.  A troubling time for the men and women who made up the bureaucracy that ran the Empire.  Those are the main characters in this, the third volume of this marvelous series.  The author once again conjures up a thrilling account of one of Rome’s more raucous and unstable times.  She continues her fine descriptive powers and her frequent humorous touch right from page 1, “Beside them sat the boiled quail’s eggs, the roasted dormice, the crispy lampreys, and the steamed turbot that constituted Vitellius’ breakfast.  This was the first course.  There were another eight to come.”  As this period in Roman history rolls on we get to meet some new characters as well as the old standbys like Mina, Sporus, Epaphroditus and Philo, who all shine by the way.  We now get to meet the famous consort of Vespasian, Antonia Caenis; a formidable woman and Domitian, his younger son.  The story is a rousing rendition of Otho’s attempt to ward off a coup and is done so in a fashion that had me alternately snickering at the antics of the characters but also in very poignant way that showed the anguish, uncertainty and sorrows of the campaign.  A page turning delight with surprises galore as the story gathers momentum for the exciting finish.  I look forward to the next edition.  4.7 stars 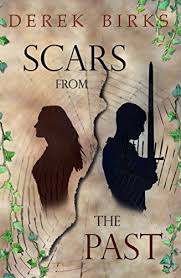 Having enjoyed the author’s previous series about the Elder family, I was happy to find out that a new set of books featuring the Elders was being written.  I knew it would involve many new names and faces but was sure that the circumstances would be full of drama and intrigue and I was not mistaken or disappointed.  An imaginative tale with a relentless stream of action culminating in…well let’s just say the ending is full of surprises.  One of the characters who was an instrumental figure in the Feud books, and one of my favorite fictional characters, makes her presence known.  I am speaking of Eleanor Elder, a woman of many talents and one who will not be vanquished no matter how much is thrown at her, though her meddling does meet with some unexpected and most dire results.  A very satisfying new entry for Mr. Birks and a worthy successor to his Feud series, as he leads the reader into the lives of Ned Elder’s family; a family that just can’t seem to stay out of trouble.  4.3 stars and a hearty shout, “Long Live Eleanor”  🙂 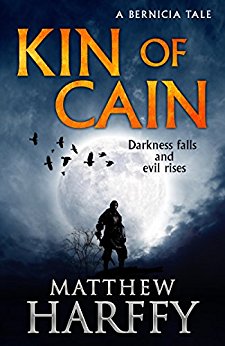 First let me say thanks to the author and the fine folks at Aria for including this poor, humble scribe with the illustrious group of reviewers on this Blog Tour.  Since I am leading off this tour, I reckon it’s appropriate for me to announce, “Welcome, and now, on with the show.”

More Dark Age tale telling from the author of The Serpent Sword.  This time he weaves a story that is well known but puts his own twist on it, and in a manner that is both entertaining and foreshadowing.  The main character in this tale is the older brother of Beobrand, the hero of Matthew Harffy’s excellent Bernicia Chronicles series.  Octa becomes part of the group of warriors chosen to ferret out and kill a night stalking monster wreaking havoc among the common folk.  As he has done in the full length  tales, Mr. Harffy brings to vivid life the ethos of a dark age warrior; the fealty owed when oathsworn, the bonding between fellow sword brothers, the ale hall boasting.  The quest to find the monster is emotion and action packed.  A boggy, misty, fen land can play with a man’s mind, so too can facing the limits of one’s endurance in a very trying situation.  Unrelenting drama unfolds as the warriors close in on their quarry and not a few surprises make their task that much more interesting.  I enjoyed learning a little about Beobrand’s big brother and the sword that plays such a large part in his tale. 4.7 stars and a Hoover Book Review’s coveted “Job well done” acclamation.  🙂 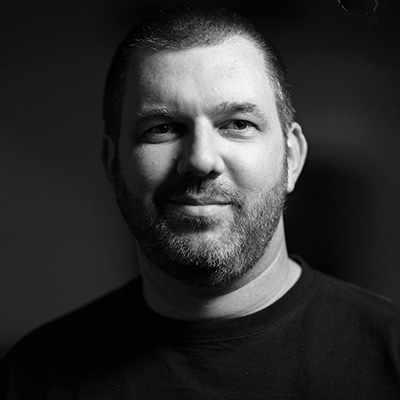 AD 630. Anglo-Saxon Britain. A gripping, action-packed historical tale set in the world of The Bernicia Chronicles. Perfect for fans of Bernard Cornwell.

Winter grips the land in its icy fist. Terror stalks the hills, moors and marshes of Bernicia. Livestock and men have been found ripped asunder, their bones gnawed, flesh gorged upon. People cower in their halls in fear of the monster that prowls the night.

King Edwin sends his champions, Bassus, Octa and band of trusted thegns, to hunt down the beast and to rid his people of this evil.

Bassus leads the warriors into the chill wastes of the northern winter, and they soon question whether they are the hunters or the prey. Death follows them as they head deeper into the ice-rimed marshes, and there is ever only one ending for the mission: a welter of blood that will sow the seeds of a tale that will echo down through the ages.

Matthew grew up in Northumberland where the rugged terrain, ruined castles and rocky coastline had a huge impact on him He now lives in Wiltshire, England, with his wife and their two daughters.