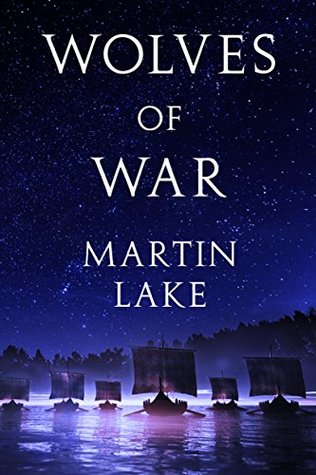 In Wolves of War, Mr. Lake has once again given us a tale of an intriguing time in Britain’s history.  The Danes, under the leadership of Ivar the Boneless have come to Britain’s shores; this time it’s not a raid and run endeavor, this time they’ve come to stay. The story revolves around the quick witted brother of a renowned blacksmith; not your typical Viking warrior, and his unexpected rise in Ivar’s retinue of advisers.  Buoyed by a host of wonderful characters, both fictional (Leif,Thorvald, Aebbe) and historical (Ivar, Guthrum, the Kings of Northumbria, Mercia, Wessex, and East Anglia), the reader is taken on an emotionally charged voyage as Leif embarks on an unexpected journey; one that will see him find love, and happiness, as well as a full slate of unwanted, dangerous troubles. One of the historical aspects I really enjoyed is the appearance of a younger Alfred, before he became ‘The Great’.  The author has written about him in prior books, but this time it provides insight to his character; his piety, his lustful nature, his politically sagacious mind. All in all an enjoyable, entertaining read of a pivotal era in Britain’s long history.  4 stars

One thought on “Wolves of War by Martin Lake”