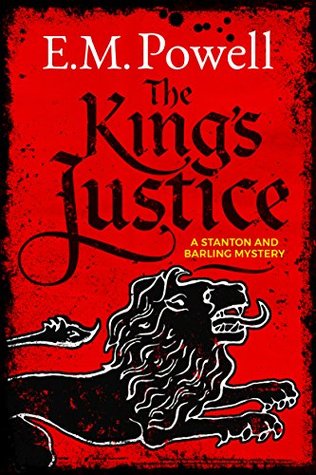 A murder that defies logic—and a killer on the loose.

England, 1176. Aelred Barling, esteemed clerk to the justices of King Henry II, is dispatched from the royal court with his young assistant, Hugo Stanton, to investigate a brutal murder in a village outside York.

The case appears straightforward. A suspect is under lock and key in the local prison, and the angry villagers are demanding swift justice. But when more bodies are discovered, certainty turns to doubt—and amid the chaos it becomes clear that nobody is above suspicion.

Facing growing unrest in the village and the fury of the lord of the manor, Stanton and Barling find themselves drawn into a mystery that defies logic, pursuing a killer who evades capture at every turn.

Can they solve the riddle of who is preying upon the villagers? And can they do it without becoming prey themselves?

Aelred Barling, an upright, by the book member of Henry II’s traveling court, and Hugo Stanton, a slovenly messenger for the court are sent to a nearby village to investigate a murder. What should have been a rather routine case to adjudicate turns out to be a bit more complicated. All facts point to one man as the culprit, but circumstances and events push Barling and Stanton to their limits in what becomes a dangerous situation. The author has put together an intriguing mystery with many twists and turns shrouding the perpetrator of the crimes while shining the light of accusation on others. It takes all of Barling’s knowledge and experience to keep control of a volatile situation, relying on his increasingly reliable assistant to piece together the ever changing puzzle. I found myself scratching my head as the story moved from one murder to the next, from one suspect to the next. As well as providing clues to the mystery throughout the book, the author portrays village life in stunning fashion, giving glimpses of the everyday look and feel of the master’s hall, the forge of a blacksmith, the urine stench of the fuller’s shed. I particularly enjoyed the growing bond between Barling and Stanton and am certainly looking forward to reading more of their adventures. 4 stars

E.M. Powell’s historical thriller Fifth Knight novels have been #1 Amazon and Bild bestsellers. The King’s Justice is the first novel in her new Stanton and Barling medieval murder mystery series. She is a contributing editor to International Thriller Writers’ The Big Thrill magazine, blogs for English Historical Fiction Authors and is the social media manager for the Historical Novel Society.

Born and raised in the Republic of Ireland into the family of Michael Collins (the legendary revolutionary and founder of the Irish Free State), she now lives in North-West England with her husband, daughter and a Facebook-friendly dog.

One thought on “The King’s Justice by E.M. Powell”