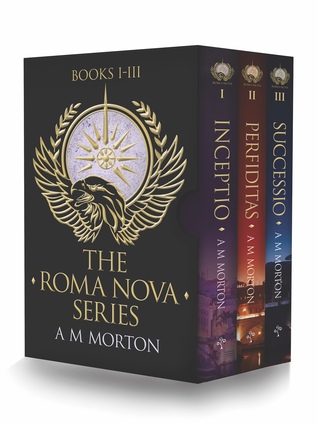 Before the collapse of the Western Empire and the Ottoman victory in the East, a group of Romans comprising twelve of the oldest families leave Rome and setup a new country in the region between Italy and Austria, Roma-Nova and it has survived into the 21st century. The three books in this set chronicle the story of Carina Mitela who is living an unassuming life as an office cubicle worker in the U.S. when she is suddenly thrust into a maelstrom of danger and intrigue. This story has elements of history, romance, international and political intrigue, rogue/shadowy covert agencies, a coming of age/coming to grips with the reality of who you are, a really nasty bad guy; a wealth of plots to keep you entertained. The action is plentiful, the emotions are highly charged and the characters are full of life.  All three are page turning, sleep depriving delights to read. 5 stars