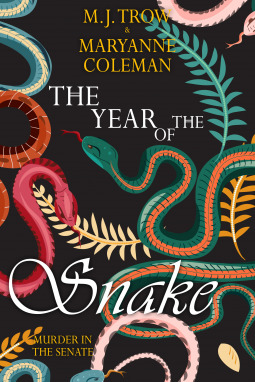 A murder mystery set during the enlightened reign of Nero (well, maybe not enlightened, more of a spoiled kid playing with power). An aged Senator, Gaius Nerva dies suddenly and it is assumed it was a natural death, but his devoted steward/slave Calidus thinks otherwise and embarks on an investigation. This search for the murderer leads in many directions including to the Imperial Court.  A cleverly concocted set of circumstances reveals many suspects and motives. Calidus, now a freedman, is persistent despite a lack of results, and an increasingly dangerous situation. The authors kept me engaged throughout this many faceted who done it including a look at Nero and the strange relationship he has with his mother, Agrippina; an interesting subplot to this enjoyable look at what Rome was like during this rather bizarre period of history. The characters, from the upper echelons of Roman society to the seedy underworld of the delightful cut purse thief, Piso are brought out in exquisite detail. The conclusion of the investigation and the resulting revelations is a top notch bit of creativity, though I will not say more about that.  🙂  4 stars