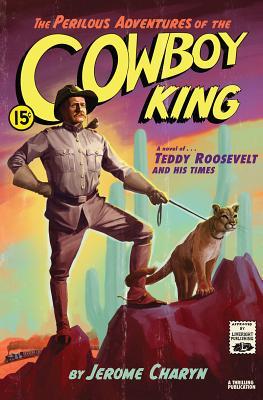 In this novel, which Kirkus Reviews calls, “colorful, entertaining” in its starred review, Charyn gives new dimension to Roosevelt, revealing Manhattan’s swampy underbelly after the Civil War, TR’s farcical and dangerous expeditions to the Dakota Badlands, and his personal anguish at losing his mother and wife on the same day.  Like the best of E.L. Doctorow, historical detail is supported by a keen grasp of language and marked by a lack of sentimentality about the past.  With a colorful supporting cast—including Buffalo Bill Cody, Eleanor Roosevelt, Leon Czolgosz (President McKinley’s assassin), plus Josephine, the lovable mountain lion who was the mascot of the Rough Riders (seen with Roosevelt on the cover), and the Rough Riders themselves, whom Roosevelt never deserted, THE PERILOUS ADVENTURES OF THE COWBOY KING is historical fiction and Jerome Charyn at their very best.

A captivating tale of the early life, and subsequent rise to the Presidency, of a true American icon. A political maverick from the start, the author gives the reader an intimate look at how and why he became such a pain in the arse to the party powers in New York and D.C. As well as the exciting narrative of TR’s adventures, the author paints a vivid picture of late 19th century politics in America. It is replete with colorfully drawn characters from precinct captains to captains of industry, from Pinkerton’s to down on their luck cowboys. My particular favorite, however, is a cougar named Josephine who forms an amazing bond with TR, and who symbolizes the spirit of The Rough Riders, a ragtag militia formed by TR, and despised by the regular army. That is a prime example of the battles TR had to fight for the little guy against the stranglehold of the wealthy. The Cowboy King is a thoroughly enjoyable look at a fascinating man; his triumphs, his hopes, and the disappointments he endured as a bonafide reformer in a vicious political atmosphere.  4 stars

My blog Historical Fiction reviews  has been selected as one of the Top 100 Fiction Blogs on the web.
http://blog.feedspot.com/fiction_blogs/

2 thoughts on “The Perilous Adventures of the Cowboy King: A Novel of Teddy Roosevelt and His Times by Jerome Charyn”