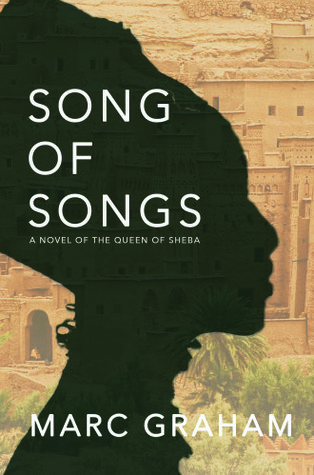 Lift the veil of legend for the untold story of Makeda, the Queen of Sheba, and Bathsheba, wife and mother of Israel’s first kings.

When Makeda, the slave-born daughter of the chieftain of Saba, comes of age, she wins her freedom and inherits her father’s titles along with a crumbling earthwork dam that threatens her people’s survival. When she learns of a great stone temple being built in a land far to the north, Makeda leads a caravan to the capital of Yisrael to learn how to build a permanent dam and secure her people’s prosperity.

On her arrival, Makeda discovers that her half-sister Bilkis (also known as Bathsheba) who was thought to have died in a long-ago flash flood, not only survived, but has become Queen of Yisrael. Not content with her own wealth, Bilkis intends to claim the riches of Saba for herself by forcing Makeda to marry her son. But Bilkis’s designs are threatened by the growing attraction between Makeda and Yetzer abi-Huram, master builder of Urusalim’s famed temple. Will Bilkis’s plan succeed or will Makeda and Yetzer outsmart her and find happiness far from her plots and intrigue?

I don’t know why it is that I particularly enjoy historical fiction tales from this era and region. Perhaps it has something to do with my first history professor at Wayne State University and his teaching of the Ancient Near East. Or, perhaps it is because of my life long fascination with ancient Egypt (Kemet) vividly portrayed in The Ten Commandments. 😎 Whatever the reasons, Song of Songs has joined my list of favorites from this period. The author has crafted a tale of three people whose intertwined fates makes for not only an intriguing tale of love, adventure, and drama filled historical events, but also a tale rich in the cultures, traditions, and gods of the time. One of the things that makes a story transport the reader into the pages, is having characters who are so immersed in their time and cultures that they draw the reader in with them. You are Makeda in the desert; you are Yetzer defying the fates; you are Bilkis building a kingdom.

The narrative and dialogue lull the reader into a page turning trance. The author skillfully weaves the three separate threads through the tapestry of their lives, bringing them together in a climatic fashion. A well told telling of the Biblical rendering of the time of David, Bathsheba, Solomon, and the building of a temple. 5 stars

Marc Graham studied mechanical engineering at Rice University in Texas, but has been writing since his first attempt at science fiction penned when he was ten. From there, he graduated to knock-off political thrillers, all safely locked away to protect the public, before settling on historical fiction. His first novel, Of Ashes and Dust, was published in March 2017.

He lives in Colorado on the front range of the Rocky Mountains, and in addition to writing, he is an actor, narrator, speaker, story coach, shamanic practitioner, and whisky afficianado (Macallan 18, one ice cube). When not on stage or studio, in a pub, or bound to his computer, he can be found hiking with his wife and their Greater Swiss Mountain Dog.

2 thoughts on “Song of Songs: A Novel of the Queen of Sheba by Marc Graham”