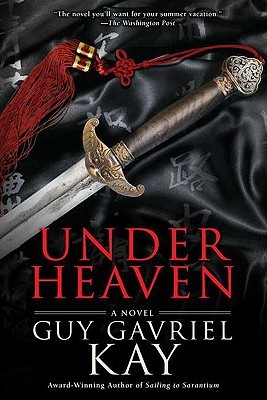 It begins simply. Shen Tai, son of an illustrious general serving the Emperor of Kitai, has spent two years honoring the memory of his late father by burying the bones of the dead from both armies at the site of one of his father’s last great battles. In recognition of his labors and his filial piety, an unlikely source has sent him a dangerous gift: 250 Sardian horses.

You give a man one of the famed Sardian horses to reward him greatly. You give him four or five to exalt him above his fellows, propel him towards rank, and earn him jealousy, possibly mortal jealousy. Two hundred and fifty is an unthinkable gift, a gift to overwhelm an emperor.

Wisely, the gift comes with the stipulation that Tai must claim the horses in person. Otherwise he would probably be dead already.

I know I should probably expect this, but once again I am blown away by Mr. Kay’s storytelling. After the death of his father, a famous general, Tai undertakes a Herculean task burying the dead on a distant and haunted battlefield. What results is a gift that changes everything, and forms the basis for an incredible tale. Like many, I suppose from a Western culture, I’ve always seen the East as mysterious and intriguing. Under Heaven showcases an Eastern empire, and the author has injected that sense of mystery and intrigue into a page turning wonder. The characters fit perfectly, the twists and turns of the plot flow seamlessly, the narrative has an atmospheric quality that pulls the reader into the pages. It is more than just a page turner. It is more like, “just one more chapter, I’ll skip breakfast in the morning.” 😊  5 stars