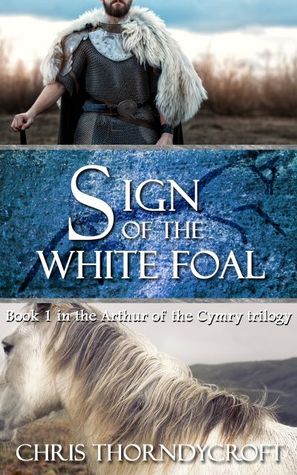 A generation after Hengest and Horsa carved out a kingdom in the east, a hero of the Britons rises in the west…

North Wales, 480 A.D. The sons of Cunedag have ruled Venedotia for fifty years but the chief of them – the Pendraig – is now dying. His sons Cadwallon and Owain must fight to retain their birthright from their envious cousins. As civil war consumes Venedotia, Arthur – a young warrior and bastard son of the Pendraig – is sent on a perilous quest that will determine the fate of the kingdom.

The Morgens; nine priestesses of the Mother Goddess have found the cauldron of rebirth – a symbol of otherworldly power – and have allied themselves with the enemy. Arthur and six companions are dispatched to the mysterious island of Ynys Mon to steal the cauldron and break the power of the Morgens. Along the way they run into the formidable Guenhuifar whose family have been stewards of Ynys Mon for generations. They need her help. The trouble is, Guenhuifar despises Arthur’s family and all they stand for…

Based on the earliest Arthurian legends, Sign of the White Foal is a rip-roaring adventure of Celtic myth and real history set in the ruins of post-Roman Britain.

You know what I love about Arthurian fiction? This – no matter what version of Arthur is being told – no matter the situation, or the time and place, a believable tale can be spun. In this intriguing tale, Arthur is the foster son of the Pendraig, the High King in Cmry, and has trained as a warrior, but as the story evolves it becomes evident that he is also a natural leader of men. In Sign of the White Foal the author has taken one of the oldest Arthurian texts and given us an exciting look at the harsh existence in post-Roman Briton. The seeming constant petty rivalries, the increasing threat from Gaelic invaders, and the conflict to claim the title of Pendraig. The story flows easily back and forth from Cadwallon’s battle to keep his crown, and the special mission undertaken by Arthur and his companions. The characters are real, their strengths, weaknesses, doubts and fears are all on display as the two story-lines gradually meld together. An enjoyable look at the beginnings of what promises to be a must read Arthurian series. 4 Stars ⭐⭐⭐⭐

Chris Thorndycroft is a British writer of historical fiction, horror and fantasy. His early short stories appeared in magazines and anthologies such as Dark Moon Digest and American Nightmare. His first novel under his own name was A Brother’s Oath; the first book in the Hengest and Horsa Trilogy. He also writes under the pseudonym P. J. Thorndyke.

For more information, please visit Chris Thorndycroft’s website. You can also find him on Twitter and Goodreads.

2 thoughts on “Sign of the White Foal by Chris Thorndycroft”