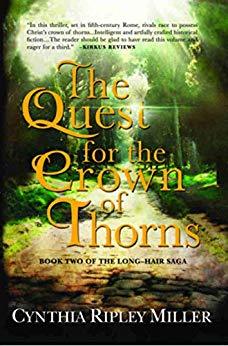 AD 454. Three years after the Roman victory over Attila the Hun at Catalaunum, Arria Felix and Garic the Frank are married and enjoying life on Garic’s farm in northern Gaul (France). Their happy life is interrupted, when a cryptic message arrives from Rome, calling Arria home to her father, the esteemed Senator Felix. At Arria’s insistence, but against Garic’s better judgment, they leave at once.

Upon their arrival at Villa Solis, they are confronted with a brutal murder and the dangerous mission that awaits them. The fate of a profound and sacred object–Christ’s Crown of Thorns–rests in their hands. They must carry the holy relic to the safety of Constantinople, away from a corrupt emperor and old enemies determined to steal it for their own gain.

But an even greater force arises to derail their quest–a secret cult willing to commit any atrocity to capture the Crown of Thorns. And all the while, the gruesome murder and the conspiracy behind it haunt Arria’s thoughts.

Arria and Garic’s marital bonds are tested but forged as they partner together to fulfill one of history’s most challenging missions, The Quest for the Crown of Thorns.

A tantalizing adventure awaits you my fellow fiction aficionados as Arria and Garic take on the perilous mission to deliver a relic so precious that people will kill to possess it. A story line with many strands, believable characters, intense drama, and engaging love story. As the journey progresses, it becomes harder to put the book down as the Crown gets closer to Constantinople. Excitement at every turn of the page including an intriguing teaser at the end. Settle back with your beverage of choice and enjoy an exciting look at the Roman world of the 5th century.  4 Stars ⭐⭐⭐⭐

Cynthia Ripley Miller is a first generation Italian-American writer with a love for history, languages and books. She has lived, worked, and travelled in Europe, Africa, North America and the Caribbean. As a girl, she often wondered what it would be like to journey through time (she still does), yet knew, it could only be through the imagination and words of writers and their stories. Today, she writes to bring the past to life.

She holds two degrees and has taught history and teaches English. Her short fiction has appeared in the anthology Summer Tapestry, at Orchard Press Mysteries.com and The Scriptor. A Chanticleer International Chatelaine Award finalist for her novel, On the Edge of Sunrise, she has reviewed for UNRV Roman History, and blogs at Historical Happenings and Oddities: A Distant Focus

Cynthia has four children and lives with her husband, twin cats, Romulus and Remus, and Jessie, a German Shepherd, in a suburb of Chicago.

On the Edge of Sunrise is the first in the Long-Hair Saga; a series set in late ancient Rome and France and published by Knox Robinson Publishing. The second book in the series, The Quest for the Crown of Thorns, was released in June 2017.