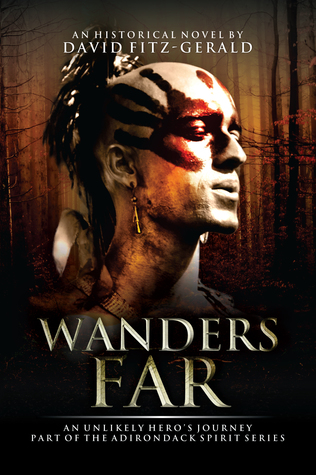 Wanders Far lived in dangerous times and was faced with one difficult challenge after another. He was a skinny, quiet boy who was raised on the banks of a tributary of New York State’s Mohawk River, hundreds of years before colonists arrived. One lifetime was not enough for Wanders Far’s old soul.

From a very young age, his wanderlust compelled him down one path after another. No village could contain him.

He was happy living a simple life in the physical world during challenging times. The spirit world had other plans.

A wise, enigmatic shaman mentored Wanders Far and helped him cultivate the supernatural visions that haunted him. His guide could only help him so far.

He set out to become a runner, carrying important messages across the lands of his people and their enemies. He ended up fulfilling a much greater destiny than he ever imagined.

The Iroquois Confederacy – comprised of the Mohawk, Onondaga, Oneida, Cayuga, and Seneca tribes was just one example of the sophisticated governments and societies practiced by these so-called savage peoples who had called the “New World” home for thousands of years. In Wanders Far the author has created an intriguing look at a time and place prior to the European ‘discovery’, and settlement. A coming of age tale of an enigmatic, and precocious boy, who plays an important role in the founding of the confederacy of the tribes, Wanders Far is also a well researched look at the cultures and history of the tribes living in what is now upstate New York. An enjoyable page turner, Wanders Far (the young man) takes the reader on his spiritual journey to discover the Path he must follow to fulfill his destiny.  4 Stars ⭐⭐⭐⭐

After a chaotic day as a business person, Dave enjoys getting lost in the settings he imagines and spending time with the characters he creates. Writing historical fiction is like making paintings of the past. He loves to weave fact and fiction together, stirring in action, adventure, romance, and a heavy dose of the supernatural with the hope of transporting the reader to another time and place. He is an Adirondack 46-er, which means he has hiked all of the highest peaks in New York State, so it should not be surprising when Dave attempts to glorify hikers as swashbuckling superheroes in his writing.

Wanders Far—An Unlikely Hero’s Journey is the first in a series of books in the Adirondack Spirit Series.

Wednesday, October 9
Excerpt at Maiden of the Pages

Monday, October 14
Guest Post at Passages to the Past

Saturday, October 26
Review at Reading is My Remedy