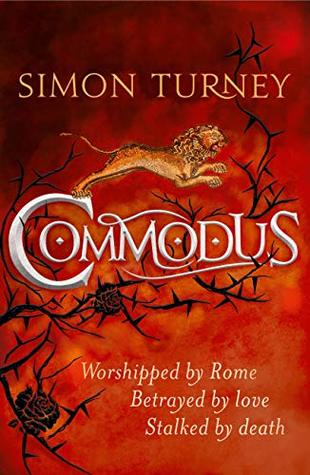 Rome is enjoying a period of stability and prosperity. The Empire’s borders are growing, and there are two sons in the imperial succession for the first time in Rome’s history.

But all is not as it appears. Cracks are beginning to show. Two decades of war have taken their toll, and there are whispers of a sickness in the East. The Empire stands on the brink of true disaster, an age of gold giving way to one of iron and rust, a time of reason and strength sliding into hunger and pain.

The decline may yet be halted, though. One man tries to hold the fracturing empire together. To Rome, he is their emperor, their Hercules, their Commodus.

But Commodus is breaking up himself, and when the darkness grips, only one woman can hold him together. To Rome she was nothing. The plaything of the emperor. To Commodus, she was everything. She was Marcia.

Well now, that was certainly not the Commodus from Gladiator. Once again, Mr. Turney has taken on myth and misconception, and has brought forth a fascinating look at one of the more enigmatic of the Roman emperors. As in his other novels, the author relies on his ability to glean from contemporary sources those facts or myths, and turn them into a page turning (and to this burgeoning author), mind boggling tale that grabs the reader’s attention from page one, word one, and does not relent in it’s grip. Written from the perspective of Marcia, the narrative is rich in detail, poignant in its telling, and once again left this reader amazed at the creative talent of the author. 5 Stars ⭐⭐⭐⭐⭐

Shahnaz is a liberal but observant Pakistani Muslim, a nurse with a dream that all pregnant women will deliver healthy babies. At her parents’ command she weds Naseer, a gentle man who encourages her work. But marrying Naseer means she must live with his extended family, including his fundamentalist older brother, Raja Haider. When their father dies, Raja Haider becomes head of the family. With this new power, he orders Shahnaz to quit her job and stay at home. Mild Naseer respects his brother’s authority, but Shahnaz rebels with the strength of a courageous warrior.

Brush explores a Muslim society threatened by extremism. The story churns with the struggles of obedience versus self-determination, piety versus zealotry, and tradition versus progress. Some seek peace, and others pursue violence to achieve what’s holy.

This, my fellow readers, is one intense story. A culture driven by centuries old traditions forms the basis for this tale of an amazing woman caught between the restrictions of her religion and the very real need for her work with pregnant Pakistani women. The characters jump off of the page with the reality of the time and place. Uncovering is one of those books that is so emotionally charged that it tugs at the reader’s heart. Repressive, insular, power over the less fortunate is something that we all need to face up to. Despite the obstacles, we can, like Shahnaz, dare to hope, dare to change.  5 Stars ⭐⭐⭐⭐⭐

Eighteen-year-old Tom Murrell could never understand his father’s dreams of carving a new life out of the wilderness. He wanted to do something else with his life besides spend it behind a plow, but with the family moving to the Red River in Arkansaw Territory, he was stuck.
Everything changes for Tom when he witnesses the death of Tiatesun, spiritual leader of the Kadohadacho tribe, and is drawn into a raging conflict between the Kado and their arch enemies, a renegade band of Osage.
His new friends Mattie and James say there is no alternative. They must use a cryptic map, drawn in a bible by Tiatesun in his own blood before he died, to find this place called Na-Da-cah-ah. Only then can Tom be sure that his family and friends will be safe.
But it is a race against time—a race against Wey Chutta’s Osage. Dangers are everywhere. The only chance to save his family is for Tom, Mattie, and James to join with six Kado warriors, make sense from the many clues they uncover on their quest, and discover the real Na-Da-cah-ah.

When I was asked to review this book I was intrigued by a couple of things; namely the locale/time frame, and the native inhabitants of that locale/time frame. Both items were new reading territory for me; the Red River area of Arkansas and the Caddo Indians. The author has geared this exciting tale towards the Young Adult age group, a genre I don’t usually read, but I found it to be well written, well researched, and certainly a book that will not only entertain, but also educate. The characters are strong; they have to be given the uncertainty, and almost constant danger that comes with a frontier existence. Kado also gives the reader a glimpse of a centuries old culture coming to grips with the reality of a new age disruption of their traditions, and their very existence as a people. A page turning adventure awaits you.