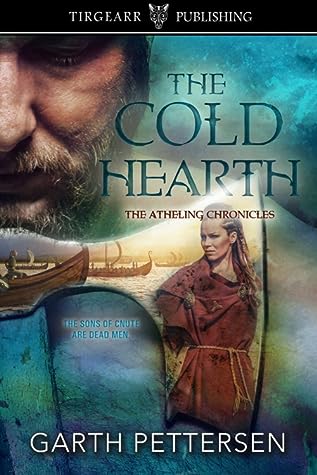 “The sons of Cnute are dead men.” The dying words of his brother’s assailant travel across the North Sea to the English Midlands.

Harald, the king’s second son, receives the warning while rebuilding a hall where he hopes to farm and lead a peaceful life with Selia, his Frisian wife. But as the hall nears completion, they learn the family who lived there before them all perished in a single night of bloodshed. Could the grounds be cursed?

Now the threat of unknown enemies casts a long shadow. Should they distrust the brooding Saxon neighbor or the two weapon-bearers they hired for protection? Should they suspect either of the two women they have taken on with the other hirelings? Only their Jewish warrior friend, Ravya ben Naaman, seems to be the only one above suspicion.

It’s not easy being the son of the King. While you might have started a new peaceful existence, and are the sort who gets along with the common folk, your family is another matter. Ever present in just about any monarchy is the issue of succession, and Harald Harefoot and his brothers aren’t the only contenders. The Cold Hearth is an engaging tale of an unsettled period in English history….the House of Wessex seeks to regain the throne from the House of Cnute, and one way to make that happen is to eliminate the Danish contenders to the throne. Wonderfully crafted characters fill the pages of this multi-threaded story; plot lines with twists and turns that leave the reader gasping at the turn of events. I was drawn into the emotional turmoil and stress resulting not only of the planned removal of Harald, but also from a brutal event in the past that threatens the tranquility of Harald’s friends and family. So, while Harald may have wanted a peaceful existence away from the turmoil, that isn’t what he gets in this rousing tale. Now I’m only guessing, but methinks that the turmoil will continue in the next episode of The Atheling Chronicles.   5 ⭐⭐⭐⭐⭐