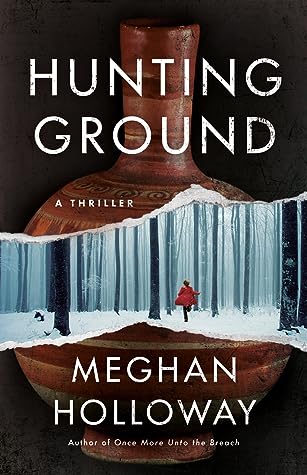 Fifteen years ago, Hector Lewis’s wife and young daughter vanished without a trace. People have long thought he was responsible, but the man he knows is behind their disappearance still walks free. As a police officer, he is sworn to uphold the law. But he has seen how little justice there is in the world. And when a newcomer’s arrival sparks a harrowing series of crimes, Hector finds himself in a race to catch a man he is convinced is a killer.

Evelyn Hutto knows what it is to be prey. She moved west to start over. But the remote town of Raven’s Gap, Montana, is not as quiet and picturesque as it appears. The wild borderlands of Yellowstone National Park are home to more than one kind of predator. Women are going missing, and Evelyn’s position at the local museum unearths a collection of Native American art steeped in secrets. As she traces the threads of the past and the present, she finds them tied to one man.

Hector is a man obsessed with finding answers. Evelyn is a woman with secrets of her own. As winter whittles the land to bone and ice, the body count rises, and both become locked in a deadly game of cat and mouse with a dangerous man. A man who is as cunning as he is charismatic. A man whose new hunting season is only just beginning.

Psychological thrillers are not my usual choice for reading. Heck, that goes for movies as well…I remember a time when I was in my teens going to a double feature of Premature Burial and The Pit and the Pendulum. I didn’t even make it through the first film before I left the theater. 😱 However, based on how much I loved the author’s previous book, Once More Unto the Breach, I decided to dispense with my idiosyncratic character flaw and read Hunting Ground. It is, as the author mentioned to me, quite different from Breach, but there are similarities nonetheless. The characters are well crafted, realism in their demeanor’s, their responses to events, the motives behind their actions, all lead the reader into an intense, taut drama. Meticulously detailed descriptions, whether it is of a small Montana town, or the sprawling, winter bound wilderness of Yellowstone immerses the readers in the surroundings, in the chilling events. As the story unfolded, and more secrets emerged, more details came to light, the twists and turns of this page turning thriller had this reader/reviewer pausing to remember to breathe. Oh, yes my  peeps and fellow travelers on the reading road, this is a good one for sure. A psychological thriller that even the idiosyncratic flawed, like me, can enjoy.

One thought on “Hunting Ground by Meghan Holloway”