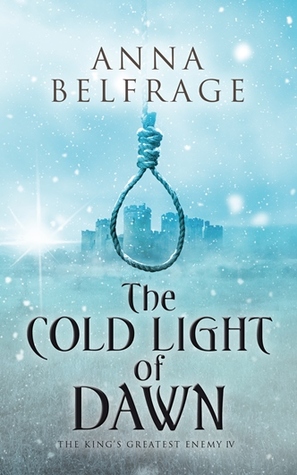 It is with great pleasure that I begin this HFVBT of the latest from Anna Belfrage’s series, The King’s Greatest Enemy.

After Henry of Lancaster’s rebellion has been crushed early in 1329, a restless peace settles over England. However, the young Edward III is no longer content with being his regents’ puppet, no matter that neither Queen Isabella nor Roger Mortimer show any inclination to give up their power. Caught in between is Adam de Guirande, torn between his loyalty to the young king and that to his former lord, Roger Mortimer.

Edward III is growing up fast. No longer a boy to be manipulated, he resents the power of his mother, Queen Isabella, and Mortimer. His regents show little inclination of handing over their power to him, the rightful king, and Edward suspects they never will unless he forces their hand.

Adam de Guirande is first and foremost Edward’s man, and he too is of the opinion that the young king is capable of ruling on his own. But for Adam siding with his king causes heartache, as he still loves Roger Mortimer, the man who shaped him into who he is.

Inevitably, Edward and his regents march towards a final confrontation. And there is nothing Adam can do but pray and hope that somehow things will work out. Unfortunately, prayers don’t always help.

The Cold Light of Dawn is the fourth in Anna Belfrage’s series, The King’s Greatest Enemy, the story of a man torn apart by his loyalties to his lord and his king.

One of the things I like to do while driving is to look for hawks in the trees or soaring overhead. There is a small copse of trees in the median between the north and south bound lanes of I-95 near exit 19 in MA where I have observed a pair of red tail hawks perching near each other. Today confirmed that they are a breeding pair as they were going at it when I drove by. I thought it was so romantic that I decided to name them Kit and Adam after the main protagonists in Anna Belfrage‘s series The King’s Greatest Enemy.  It is only fitting given the fact that throughout the course of this brilliant series, it becomes very apparent that Kit and Adam really, really like each other. An important aspect to the story, their struggles; emotionally and physically, are but a piece of the tense filled atmosphere surrounding the royal court. Thinking that Edward III is still too young to rule without their guidance and powerful influence, Mortimer and Isabella seek out the plots that would bring them down. Adam is torn between his love (and first allegiance) for Mortimer and his sworn oath and loyalty to Edward; Kit is torn between her duty to Queen Phillipa and her feelings toward Isabella. Throw in a few plot twists – strained friendships; return of old enemies; extreme physical endurance, to go along with the strains and schisms at court and you, my dear reader, are in for a page turning, emotional roller coaster ride of a tale.  5 Stars and the highly sought after Hoover Book Review’s “It’s tough to put this book down” Award.

Anna was raised abroad, on a pungent mix of Latin American culture, English history and Swedish traditions. As a result she’s multilingual and most of her reading is historical- both non-fiction and fiction. Possessed of a lively imagination, she has drawers full of potential stories, all of them set in the past. She was always going to be a writer – or a historian, preferably both. Ideally, Anna aspired to becoming a pioneer time traveller, but science has as yet not advanced to the point of making that possible. Instead she ended up with a degree in Business and Finance, with very little time to spare for her most favourite pursuit. Still, one does as one must, and in between juggling a challenging career Anna raised her four children on a potent combination of invented stories, historical debates and masses of good food and homemade cakes. They seem to thrive…

For years she combined a challenging career with four children and the odd snatched moment of writing. Nowadays Anna spends most of her spare time at her writing desk. The children are half grown, the house is at times eerily silent and she slips away into her imaginary world, with her imaginary characters. Every now and then the one and only man in her life pops his head in to ensure she’s still there.

Other than on her website, www.annabelfrage.com, Anna can mostly be found on her blog, http://annabelfrage.wordpress.com – unless, of course, she is submerged in writing her next novel. You can also connect with Anna on Facebook, Twitter and Goodreads.

Thursday, March 1
Feature at What Is That Book About

Wednesday, March 7
Review at Oh, for the Hook of a Book!

Friday, March 9
Review at A Chick Who Reads

Tuesday, March 13
Guest Post at Oh, for the Hook of a Book!

Thursday, March 15
Feature at Passages to the Past

Monday, March 19
Review at So Many Books, So Little Time

Wednesday, March 21
Review at Svetlana’s Reads and Views
Feature at A Literary Vacation

Thursday, March 22
Review at Back Porchervations

During the Blog Tour we will be giving away a complete set of The King’s Greatest Enemy series to one winner & two winners will win a paperback copy of The Cold Light of Dawn! To enter, please enter via the Gleam form below.

– Giveaway ends at 11:59pm EST on March 30th. You must be 18 or older to enter.
– Giveaway is open INTERNATIONALLY.
– Only one entry per household.
– All giveaway entrants agree to be honest and not cheat the systems; any suspect of fraud is decided upon by blog/site owner and the sponsor, and entrants may be disqualified at our discretion.
– Winner has 48 hours to claim prize or new winner is chosen.

With the deposing of Edward II, the ruler over England is now Edward III, though he is ruled by his mother Queen Isabella and her lover, the formidable Lord Mortimer.  Adam now serves the young King, his loyalty is resolute even though he still harbors great affection for Mortimer.  In this, the third tale of Adam and his wife Kit, the author brings to life the increasing tension in the royal court as Edward III comes of an age where he longs to shed his keepers and take up the mantle of kingship on his own.  It is a story filled with twists and turns; the emotional frailties of the human spirit; the battle for control of the crown; the longing for home and loved ones.  It is also a story of love and romance; Isabella and Mortimer, Edward and his young wife Phillipa, and most especially between Adam and Kit.  The author is on her game when it comes to the foibles and joys of the bonds of love.  An eloquent, page turning drama awaits the reader, though I must admit to having to stop turning pages when Kit and Adam are – well you’ll see for yourself.  🙂  I’ve come to appreciate the amazing talent Anna Belfrage has exhibited in drawing me into the stories she writes, and Under the Approaching Dark is another fine example of that talent.  5 stars