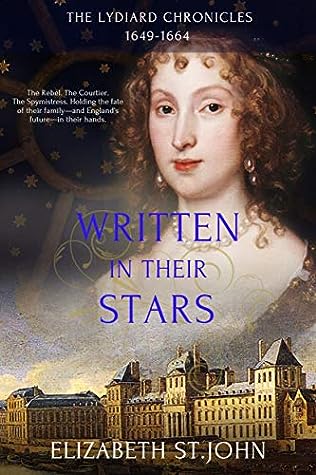 London, 1649. Horrified eyewitnesses to King Charles’s bloody execution, Royalists Nan Wilmot and Frances Apsley plot to return the king’s exiled son to England’s throne, while their radical cousin Luce, the wife of king-killer John Hutchinson, rejoices in the new republic’s triumph. Nan exploits her high-ranking position as Countess of Rochester to manipulate England’s great divide, flouting Cromwell and establishing a Royalist spy network; while Frances and her husband Allen join the destitute prince in Paris’s Louvre Palace to support his restoration. As the women work from the shadows to topple Cromwell’s regime, their husbands fight openly for the throne on England’s bloody battlefields.
But will the return of the king be a victory, or destroy them all? Separated by loyalty and bound by love, Luce, Nan and Frances hold the fate of England—and their family—in their hands.
A true story based on surviving memoirs of Elizabeth St.John’s family, Written in their Stars is the third novel in the Lydiard Chronicles series.

Another triumph, another fascinating read. The author has retained that emotional tug at her reader’s hearts throughout the series, while at the same time providing a powerful tale of shattered dreams, hopes, and survival in a country torn by civil war, and rife with divisive politics that tear families apart. The trials and tribulations of the family, overwhelming at times, are rendered beautifully through the strength of the characters; characters who pull the reader into the turmoil, the chaos, the victories in an ever changing reality.  Let the pages turn, my fellow readers – Luce, Nan and Frances are calling you.   5 Stars ⭐⭐⭐⭐⭐

Elizabeth St.John spends her time between California, England, and the past. An award-winning author, historian and genealogist, she has tracked down family papers and residences from Nottingham Castle, Lydiard Park, to the Tower of London. Although the family sold a few castles and country homes along the way (it’s hard to keep a good castle going these days), Elizabeth’s family still occupy them – in the form of portraits, memoirs, and gardens that carry their imprint. And the occasional ghost. But that’s a different story…

During the Blog Tour, we are giving away two signed copies of Written in their Stars! To enter, please use the Gleam form below.

– Giveaway ends at 11:59 pm EST on January 10th. You must be 18 or older to enter.
– Paperback giveaway is open to US residents only.
– Only one entry per household.
– All giveaway entrants agree to be honest and not cheat the systems; any suspicion of fraud will be decided upon by blog/site owner and the sponsor, and entrants may be disqualified at our discretion.
– The winner has 48 hours to claim prize or a new winner is chosen. 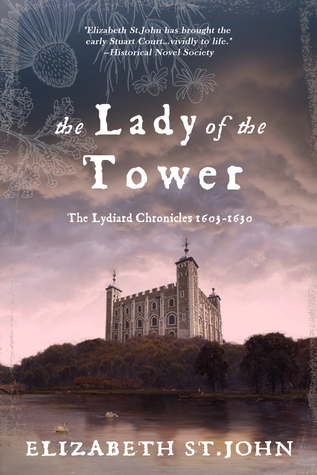 I thoroughly enjoyed reading this book.  A fascinating tale of the period when England said goodbye to the Tudors and hello to the Stuarts. The protagonist, Lucy, grows up in a household where she is treated with contempt by her guardian and by her scheming sister Barbara. In a time when women had very little say in their futures and where the intricate, backstabbing antics of the Royal Court, Lucy struggles to survive.  Married to an important member of the King’s retinue of courtiers, she finds herself living in the infamous Tower of London, the wife of the Tower Gaoler.

The author paints a vivid picture of life in the early 17th century. I was drawn in by the descriptive, and indeed the educative nature that arises from the pages. Lucy, a woman, dares to formulate and even more daring, lets her opinions known. It was indeed a world dominated by men of noble birth, not very unlike the world we live in now(substitute rich for noble). In Lucy’s words, “I so tire of these court behaviors, where the men who rule think only of their own affairs and not of those of the citizens of this land.” Words that I utter every day.

I chose to read this book not knowing much of the period, at least not from the perspective of the court of King James and his son Charles. I now know a lot more, and if there is one thing I love to do is to learn history. If I can do that and be entertained along the way, then so much the better. The author has done those things while at the same time preparing the way for a sequel. After all of the pain, anguish, fear, and even the joys of her life, Lucy emerges as one of the more interesting characters I have come across in my historical-fiction reading. 5 stars