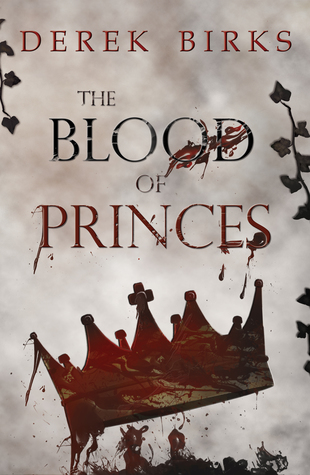 A savage tale of love, treason and betrayal.
A bloody struggle for power at the heart of the royal court.

In April 1483, the sudden death of King Edward IV brings his 12 year old son to the throne.
Restless young lord and ex-mercenary John Elder is newly-appointed to the service of Edward, Prince of Wales, and charged with the boy’s safety. His first task, escorting the new king to London for his coronation, seems a simple one but the accession of a boy king raises concerns among the leading noblemen of the land.
As old jealousies and feuds are rekindled, the new king’s uncle, Richard, Duke of Gloucester, seizes control and plunges the kingdom into crisis. But is Gloucester young Edward’s enemy, or saviour?
While John, outlawed and trapped, must wait to see how events unfold, other members of the battle-scarred Elder family are drawn, one by one, into his conspiracy. Soon they are mired so deep in the murky underbelly of London society, that there seems no hope of escape from the tangle of intrigue and murder.
In the end, all lives will hang upon the outcome of a daring incursion into the Tower of London itself.

I’m of the opinion that if you Google the phrase “adrenaline rush”, you should be directed to a page describing Derek Birks’ fictional 15th century family, The Elders. Throughout the tales in both the Rebels and Brothers series, and in the Craft of Kings, the reader is treated to intense emotional upheaval, traumatizing losses, hopeless situations; and yet the Elders persevere in the face of all the changes and challenges. I may have stated in my review of one of the prior books, that Eleanor Elder is at the top of a long list of my favorite fictional characters…after reading The Blood of Princes, I now have to add Lady Margaret Elder (Meg).

It’s tough enough being proclaimed an ‘outlaw’. Now, John Elder faces impossible tasks,.. keeping his family intact, rescuing Tower imprisoned Princes of the Realm, and by the way, staying alive. Book 2 is a certified roller-coaster ride through the transition from Edward IV to his son; but wait, there’re more contestants to the throne, more loyalties tested, more oaths sworn or forsaken, and a whole lot more danger to life and limb. The author has once again delivered the entire package, so dear reader, fasten your seat belts. The adrenaline is about to start coursing through your veins.  5 stars

Having enjoyed the author’s previous series about the Elder family, I was happy to find out that a new set of books featuring the Elders was being written.  I knew it would involve many new names and faces but was sure that the circumstances would be full of drama and intrigue and I was not mistaken or disappointed.  An imaginative tale with a relentless stream of action culminating in…well let’s just say the ending is full of surprises.  One of the characters who was an instrumental figure in the Feud books, and one of my favorite fictional characters, makes her presence known.  I am speaking of Eleanor Elder, a woman of many talents and one who will not be vanquished no matter how much is thrown at her, though her meddling does meet with some unexpected and most dire results.  A very satisfying new entry for Mr. Birks and a worthy successor to his Feud series, as he leads the reader into the lives of Ned Elder’s family; a family that just can’t seem to stay out of trouble.  4.3 stars and a hearty shout, “Long Live Eleanor”  🙂

This quote is from my review of book 3 in the series: “When I read book 1, Feud, I enjoyed it and felt that the Elder clan was nothing if not resilient in the face of turmoil and trouble,  When I read book 2, A Traitor’s Fate, I enjoyed it even more and felt that the Elder clan couldn’t possibly stand much more in the way of turmoil and trouble. I have finished book 3, Kingdom of Rebels, and really enjoyed it and am convinced that the Elder clan has reached the limit of human endurance and could use a little peace and quiet”    From the first few pages of The Last Shroud, it was apparent that peace and quiet were not in the cards.  The author has delivered another tension filled entry into this entertaining series.  The characters have been fully developed by now; Ned especially has changed from his younger ‘headlong into the fray’ into one who has seen, and done enough violence and death but is still a formidable part in the struggle to keep his King on the throne and to protect his family; a family of some amazing women, particularly his sister Eleanor.  I know I said that Ned protects his family but in Eleanor’s case, it seems that sometimes she needs protecting from herself.  Willful, headstrong, stubborn; these do not begin to describe this most remarkable woman, one of my favorite fictional characters and that says a lot given how much I read.  🙂  This is also one of my favorite series; one of those that merits my having to put the book down for a bit, take a deep breath and mutter “Holy Crap” or some such utterance.  Now that the series is finished I look forward to not only reading it again sometime in the future but am chomping at the bit for Mr. Birks’ next project.  Phew, the finale of book 4 is intense just like the total package.  5 stars and a Hoover Book Review “You all gotta read this!”

Let me start out this review by stating that I absolutely loved the first two books in the series and wondered if the author would continue to elicit my love in book number 3.  It is the opinion of this humble, yet somewhat revered scribbler of reviews, that M.J. Logue has risen above the rather high expectations I had for Wilderness of Sin.  This is a war story that, while it does provide excellent accounts of the battles and sieges, is more in the way of a delving into what makes people tick kind of a story.  The author has given us wonderfully drawn characters, Hollie and the others who have been around from the beginning of the war are changing.  Some are maturing, such as Thankful and Luce, some are more hardened, Fairfax, and some are relinquishing their irascible exterior, Hollie.  Regardless of the changes, the character development is what makes this book sing.  I think the best chapter in the book has nothing to do with the war, in fact it takes place in Het’s garden as Thankful or Hapless or Apple, as he is called by a precocious toddler, and the self same toddler engage in eating bugs.  It is a chapter I would loved to have written myself.   🙂    5 stars without a doubt.

When I read book 1, Feud, I enjoyed it and felt that the Elder clan was nothing if not resilient in the face of turmoil and trouble,  When I read book 2, A Traitor’s Fate, I enjoyed it even more and felt that the Elder clan couldn’t possibly stand much more in the way of turmoil and trouble. I have finished book 3, Kingdom of Rebels, and really enjoyed it and am convinced that the Elder clan has reached the limit of human endurance and could use a little peace and quiet; though I’m pretty sure that given the way book 3 ends that book 4 will offer little in the way of peace and quiet.  At the end of book 2, Ned Elder has been exiled from England for 5 years…his return is much anticipated not only by those who need him to set things right but also by those who need him dead.  The story is full of action, intrigue and cover to cover excitement.  The author does a splendid job of story telling of a time of civil unrest, personal feuds and plots to dethrone a King,  This is not a world and time of instant communication; rather it is a fact of life that plans go awry frequently and this makes for some rather nice plot twists for the reader while often spelling doom for the participants.  The characters, those who survive as well as those who do not are well developed and believable and the ones who have been around since the beginning continue to evolve nicely.  If you are looking for a series of books filled with stressful situations and passionate, determined characters set into a historical framework then look no further than Feud.  I am looking forward to book 4…there is more to come in the Elder story.  5 stars.

This is the second book in the series and one that I really was looking forward to reading as the first book really got my attention.  The author does a masterful job in creating a story filled with wonderful characters and great story lines.  This period of English history is one that I find fascinating and to come across well written fiction that deals with this period is a big plus.  The author has done a superb job in creating a page turning, drama filled tale[one that kept me up later than I would like at times 🙂 ].  He has also left me wanting more…I cannot wait to read book 3.  I give it 5 stars and a hearty recommendation.

Today I’m interviewing Derek Birks, author of “Feud,” a novel of the War of Roses. “Feud” is the compelling story of Ned Elder, his sisters and the girl he loves. As the civil war rages across a snow-covered battlefield, they fight for survival and the bitter feud is played out to its bloody conclusion.

1.Why did you choose the Wars of Roses?

Feud is a masterpiece of fiction woven into the fabric of the history of The War of the Roses  in mid 15th century England.  Ned Elder, the main protagonist is thrust into the maelstrom of loss and sorrow right from the get go of the book and must find the strength and reserve to combat his doubts and fears as well as a host of really nasty enemies as he seeks to recover what is left of his family and the woman he loves.  The author treats us to an astounding array of characters from the grim and determined Ned, the repulsively villainous Radcliffe family, and a host of women whose strength under staggering cruelty is one of the highlights of this entertaining, page turning saga.  Many times throughout my reading I had to stop and collect my thoughts as plots unfolded in surprising developments.  Kudos to the author for producing a well researched and well written book.  I rate it at 5 stars and have already purchased the second book of the series in great anticipation.

I live in Berkshire in England. Apart from writing, I enjoy travelling  and I spend my spare time gardening, walking and reading. I’ve also discovered archaeology of late and I am currently taking part in a long term dig at a Roman villa site.
For many years I taught history in a secondary school and that experience has enabled me to gain some small insight into what people find interesting in historical material. I’ve read historical fiction for as long as I can remember but my own favourite has been Bernard Cornwell and I suppose his work has influenced my humble efforts more than any other. I started my first book when I was seventeen but somehow life took over and I never finished it. But the passion for writing lived on! I took early retirement several years ago to concentrate on writing again and Feud is my first book.