After Sancho II of Castile dispatches his champion Rodrigo Diaz de Vivar to capture his brother, King Garcia of Galicia, he hopes it is a defining moment in his quest to reunite the lands of his father under one banner. But Alfonso VI of Leon is one step ahead, and has already added the lands of Galicia to his domain. When the only alternative is war, Sancho turns to Rodrigo to lead the armies of Castile, and he must use all his tactical acumen to defeat the Leonese in the field. Only one son of Fernando can claim victory and become the Emperor of Hispania.

Rodrigo and Antonio, now a knight of the realm, find difficulty adjusting to the new regime. Dissent and unrest run rife throughout the kingdom, and the fear of a knife in the dark from enemies old and new hangs heavy upon the pair. But if it is allowed to fester, it threatens to undo all that has been achieved. Can Rodrigo and Antonio root out the enemies of the king, and prevent chaos reigning throughout the land?

The Fall of Kings in the breath taking third instalment of the Legend of the Cid.

One of the results of my reading this captivating series is that I find myself researching what to me is an unfamiliar piece of history, and what is abundantly clear is that the author has created an amazing tale from the historical record. I had enjoyed the first two volumes, this one I love. The author has captured the mindset of the medieval knight, the loyalty and devotion to one’s Lord and King, and the unending enmity between rivals for the throne. Brutal is a good word to describe any civil war, and this one between Leon and Castile is no exception. But wait, there’s more – throw in the increasing tension between Christian and Moor…a good old fashioned, fueled by religious fervor, war is in the offing. And lest we forget, there’s still a little matter of vengeance to complete. 😎 5 ⭐⭐⭐⭐⭐ 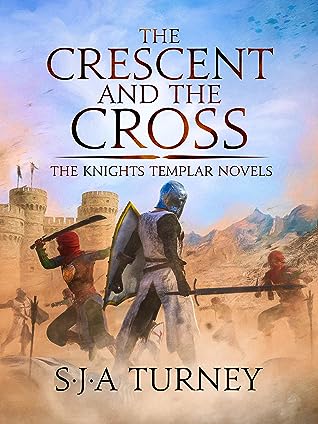 An epic battle of the Reconquista; a personal struggle to survive; a fight for glory.

War is brewing, and the Pope has summoned a crusade. The nations of Christendom are rallying to fight the Almohad caliphate, but they are a formidable foe.

Meanwhile, behind Moorish lines, a fortress held by Castile is under siege. As the siege falls, a knight is lost. Arnau leaves on a dangerous, near-suicidal quest to save him, a new squire in tow.

In the heat of the sierras though, things are not as they seem. War is coming to Iberia and all will be tested. Arnau’s sword arm will need practice, as will his mind.

You would think that after the number of books that I have read by SJA Turney, that I would have an idea of what to expect; that it would be unusual for me to be surprised by what transpires on his written pages. That does hold true for The Crescent and the Cross, for the most part – the trademark Turney touches of placing the reader in the footsteps of his characters traversing terra incognito painstakingly described – action that delivers sights, sounds and the smells of the brutality of battle – inducing audible gasps at surprise twists in the plot…and so on. However, I cannot shirk my duty as a humble, yet perceptive, scribbler of reviews. I am filing a complaint with the TEToFC (The Ethical Treatment of Fictional Characters) for the sheer scope of  physical, emotional, mental, and spiritual agony imposed upon Brother Arnau de Valbona throughout the narrative which in turn drags the poor reader into the trauma, causing accelerated heart rates, shrieking, and lack of sleep. Yes, my fellow readers, Mr. Turney has done it again. Oh, by the way, he leaves us hanging at the end…a not so subtle ploy to pull us into the next volume in the series. Hah…it won’t work on me, I would buy it anyway.😊 Five ⭐⭐⭐⭐⭐ 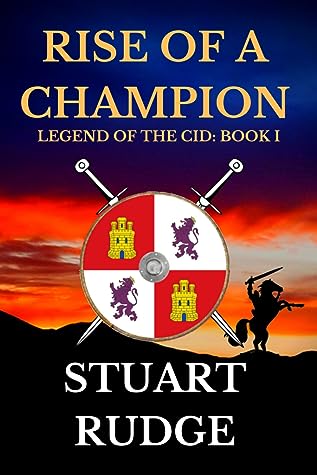 Antonio Perez is the son of a knight and a returning war hero, yet he loathes the idea of following in his father’s footsteps. But when his father is executed for alleged treason against Fernando, King of Leon-Castile, he launches a desperate bid to save his life and clear his name. Antonio soon learns that the world is much crueller and darker than he ever could have imagined.

Bereft of hope and condemned to slavery for his sins, he finds himself in the household of a young knight named Rodrigo Diaz de Vivar, a man destined for greatness. Together, they must face their demons and put an end to the man responsible for the downfall of the fathers; known as Azarola, renowned for his fox like cunning and malice, and one of the most powerful lords of Leon.

Rise of a Champion is the epic beginning to the Legend of the Cid.

It seems that no matter how many historical fiction books I read, there are always historical events, locales, and personalities that I know little or nothing about. Sometimes these events, important though they are, become overshadowed by concurrent events in other parts of the globe. Rise of a Champion is the first book in a series about Antonio Perez, El Cid…undoubtedly an important person in an important time in what is now Spain. It is a rousing tale of his early life; the tortuous road he takes to salvage his family’s honor. The author has done his homework and has created a very entertaining tale of the clash of Moor versus Christian. The characters are well developed, fitting into the time, place and cultures of the era. I had very little knowledge of this period even though I have read many books that take place at the same time – an example of the overshadowing effect – the year Rise of a Champion ends is 1064 – lots of stuff going on in Normandy and Britain right about then. 😊 But, it is good to branch out, to learn about, and be entertained by history no matter the time or place. I am looking forward to following the rest of El Cid’s tale. 4⭐⭐⭐⭐