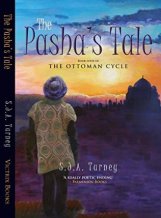 Once again I find myself in awe of Mr. Turney.  He can flat out write, whether it be Roman fiction, the Yorkshire phone book, or in this case the final installment of The Ottoman Cycle.  It has been five years since Skiouros has been home to Constantinople/Istanbul but his homecoming is hardly peaceful as he finds himself embroiled in a complicated plan to thwart a coup against Beyazid.  The story is full of intrigue involving the centuries old antagonism between Islam, Christianity and Judaism and the author does a commendable job in balancing the good and the bad of all three.  Full of action, and replete with fascinating plot twists plus the trademark descriptive acumen of the author, the tale takes the reader all over the ancient Turkish city; a city of the Greek, Turk, Jew and Romani peoples.  Each locale is delivered in stunning portrayals giving the reader a wonderful chance to visualize what Skiouros and friends are up against.  I think what I enjoyed most in this piece in this series of tales is the way the author brings it to a conclusion…a very satisfying ending indeed.  5 stars. 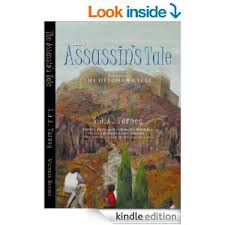 It’s a simple arrangement really, Mr. Turney writes and then I revel in the reading.  This is the third book in The Ottoman Cycle which takes place in the late 15th century and has taken the protagonist from his home of Istanbul in his quest to avenge the death of his brother.  At the end of book two, Skiouros in  a mad dash from certain death finds himself aboard The Pinta and winds up in The New World.  His time there, though brief, has imbued him with a strengthened resolve and a new sense of patience.  This is the main plot, can Skiouros see the deed through to completion, does he have the will and fortitude to assassinate the man responsible for his brother’s death?  Finding his enemy is the easy part as Cem has been the guest/hostage of The Pope, well that is until he becomes the guest/hostage of King Charles of France.  Getting to him is the challenge and proves to be an arduous one for Skiouros and his friends.  Through the expediency of forming a mercenary outfit, they gradually make their way into the Vatican only to have Cem traded away in peace negotiations and is now being guarded by the French army.  A daunting task filled with adventures and danger and death.  The author has never been shy about killing off strong/major characters but those deaths are part of the fabric of the story and as such can be forgiven despite the pain inflicted upon the poor reader when another favorite bites the dust.  A truly exceptional tale that was well researched and well developed.  5-stars

I have a slight quirk in my reading habit in which I occasionally have to stop and put the book down just before something harrowing, exciting or pivotal is about to happen.  I don’t do it all the time but while I was reading The Priest’s Tale by S.J.A.Turney I found myself doing it often.  This, the second volume of The Ottoman Cycle, continues the tale of Skiouros who is now on Crete, leaving Istanbul behind at the end of volume one disguised an Orthodox Christian priest.  The year is 1492 and Skiouros has been preparing himself to deal with the one person left responsible for the death of his brother.  Deeming the time to be right he leaves Crete and is headed to Rome where his foe is a prisoner/guest of Pope Innocent VIII.  The trials and tribulations of what should have been an easy voyage are the focus of this exciting story.

Hassan Ecti, captain of an Ottoman war ship has his own mission, albeit an over zealous one as he is determined to destroy any vestige of Christianity in lands that are now being taken away from the Muslim faithful in the West, lands that they have been settled in for seven centuries are now under control of the hated Pope.  The clash between Hassan and Skiouros and his friends is full of the blind bigotry brought on when religions collide, a violent collision that continues today.

Mr. Turney has given us a tale that is full of suspense, full of surprises, full of the turmoil inherent in any good book.  Skiouros has grown in character and we are able to see and feel the anguish he encounters in his bid for vengeance.  The supporting cast are also well written, good guys and the never ending supply of baddies.  I read a lot of historical fiction and it is the baddies that make these tales interesting and hard to put down.  Hassan Ecti rates as one of top five baddies I’ve encountered.

Descriptive and full of intrigue and surprises, The Priest’s Tale takes the reader on a wonderful ride with a host of great characters and a most entertaining ending that leads into volume three, The Assassin’s Tale.  The author has, in my own humble opinion, created yet another masterful, hard to put down glimpse into the past.  Well done, Mr. Turney, keep on writing as I am not yet sated.