Treachery amid the dark menace and magic of the German wilderness.
SPRING, 38 AD. Far from the intrigues of Caligula’s Rome, the legion fortress of Carnuntum stands alone against the forested wilderness across the Danube River.

Ex-Army tribune Marcus Carinna waits nearby for his beloved, the Germanic priestess Aurima. Stunned by treason in his family, he sees one hope of earning back his honor: to recover a lost legion’s sacred Eagle captured by rebels. He needs Aurima’s help to succeed — but after promising months ago to win the support of her chieftain father, a brutal enemy of Rome, she still hasn’t returned.

When an imperial spymaster recruits him for a secret mission among the hostile German tribes, Marcus jumps at the excuse to search for her. But as his troops slog along the rutted track of the Amber Road, he will discover that he is not out of reach of his enemies’ vengeance — and that saving the woman he loves is going to demand more heart and will than he knew he possessed.

If you enjoy good historical fiction — rich, meaty novels that immerse you in another time, peopled with characters you truly care about — you’re the kind of reader likely to love AMBER ROAD, the second installment in the epic saga of Roma Amor.

An emotionally charged tale to say the least, my fellow readers. While there are many characters involved in this tale of honor, loyalty, and above all; love, the range and depth of feelings, and passions of Aquilo (Marcus) and Aurima are what makes this sequel to Roma Amor such a pleasure to read. Mind you, that’s not the only reason, the underlying plot to reunite Aquilo and Aurima is chock full of excitement. Excitement in the sense that occasional pauses are required to take a breath, or to exclaim, “I didn’t see that coming!” Like the forest encased, and unnerving Amber Road, the pathway of this story is shrouded in surprises, urging the reader to tread further into the shadowy confines. A tale of personal anguish, trials, and fleeting joy, but also a tale of the ongoing dance of tension between Rome and the Germanic tribes who call that forest their home. 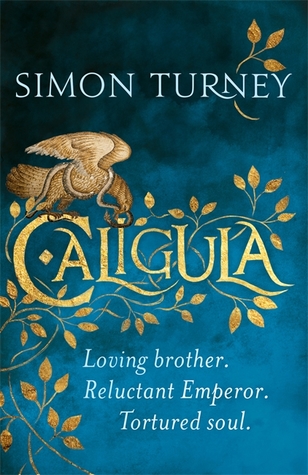 Whenever I think of Caligula, I see John Hurt’s I,Claudius portrayal, one of a madman ruling an empire.  In Roma Amor, we find a different Caligula, one who is still working out how to be Emperor while trying to keep at bay the tormenting demons in his mind.  This story, while it is certainly about Caligula, is more than that.  Marcus Carinna returns to Rome, a successful military campaign completed and hostages in tow and finds himself in a struggle to find the truth about his family and the truth behind Caligula’s rise to power.  It is also a tale of loyalties, mostly misspent loyalties, to the greater good of Rome.  I found it easy to like Carinna and likewise felt the pain and anguish he experiences throughout the book.  Indeed, that is one of the strengths of the story, that the characters, real and fictitious, are believable; no matter their station or role.  The plots and subplots keep the reader guessing as Carinna and Caligula head into a clash of wills; a clash that an emperor usually wins…but I will leave it at that.  3.8 stars