The Dacian kingdom and Rome are at peace, but no one thinks that it will last. Sent to command an isolated fort beyond the Danube, centurion Flavius Ferox can sense that war is coming, but also knows that enemies may be closer to home.

Many of the Brigantes under his command are former rebels and convicts, as likely to kill him as obey an order. And then there is Hadrian, the emperor’s cousin, and a man with plans of his own.

“An instant classic of the genre.” HARRY SIDEBOTTOM

“An authentic, enjoyable read.” THE TIMES

I have read a lot of Roman era historical-fiction, and I follow the works of a plethora of authors who write in that genre. So, I’m not exactly looking for ‘new’ authors as my ‘to be read’ pile is already overloaded with books written by those authors I already follow. However, because I have garnered some little notice in the blogosphere with my book reviews, I occasionally get unsolicited requests for read & reviews. Such was the case for The Fort. I was intrigued by the subject matter, and when I saw that one of my go to Roman authors stated this about The Fort, “An instant classic of the genre.” , then I was convinced to do the deed. Turns out it was a good decision as The Fort is one of those books that pulls the reader in, daring them to not turn the next page. A superbly detailed account full of the historical events plumped up with some wonderful fiction. The characters are true to form, the action relentless, and a narrative that is punctuated with snappy dialogue. While the main protagonist is Flavius Ferox, to me the star of the show is his wife, a Brigantine Queen. I fell under her spell early on, kind of like Brassus (you’ll understand when you read the book). Now I hate spoilers, so I’ll be vague – the ending caught me a little by surprise – though it does pave the way for more tales of the Trajan/Hadrian era, and that my fellow Roman readers means I have another author to follow. 5 ⭐⭐⭐⭐⭐ 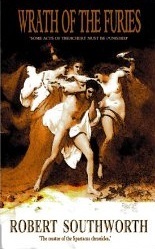 Powerful men will do whatever it takes to maintain or increase their power – even if it destroys an entire Legion.  Wrath of the Furies follows the exploits of a newly appointed magistrate; charged by Hadrian to administer justice to all segments of Roman society, no matter how rich or poor.  Lucius is not a brave man, nor is he a powerful one, but he does possess the intelligence and perseverance to succeed.  A fast paced mystery awaits the reader as Lucius and his crew struggle to identify the man or men responsible for the destruction of the legion while a brutal killer hunts the same men. A tale paved with frustrating stops and starts for the investigators; twists and turns in the plot, surprises galore and an exciting, climatic conclusion.  I look forward to the sequel.  4.3 stars