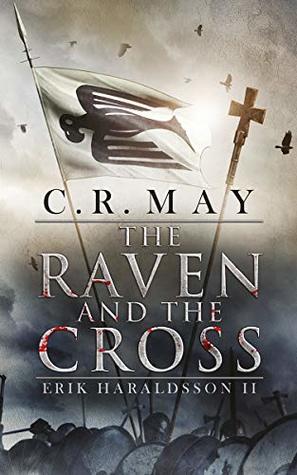 The North: 937AD – Three years have passed since the English king Athelstan bribed treacherous jarls to take Erik’s half-brother as king in Norway.

Forced from his kingdom, Erik Bloodaxe returns to the Viking ways of his youth. Warlords are driven from Danish lands, Saxony burns, and Dublin falls to a brutal assault before the prow beasts of Erik’s fleet turn south to stalk the seas off Al-Andalus.

As Erik’s reputation as a battle winner spreads his sons grow to manhood, and together they carve a new kingdom to rule from the islands which gird Britain’s north-west.

But Bloodaxe is not alone in suffering the Imperial ambitions of the southern English, and when a half-remembered figure leads a Northumbrian deputation to the king’s Orkney fastness, events are set in motion which will lure Erik south to face his greatest test.

The Raven and the Cross continues the turbulent story of Erik Haraldsson, a legendary king of the Viking Age.

An exciting sequel to Bloodaxe, Eric is a little older now. A bit more mature, a bit more pragmatic, without dulling the warrior within. The author portrays this formidable son of Harald Fairhair at the height of his battle prowess, and his abilities as a leader, who inspires not just loyalty from his people, but also love as well.  The underlying thread in book 2 is the fulfillment of a prophecy Erik had received as a young man. It was prophesied that Eric would be a king five times. He and his retinue do a fair bit of traveling in this tale, gaining wealth and prestige, as well as getting closer to achieving that prophetic number. Page turning drama, characters who give life to an era shrouded in mystery, and the coming clash of the old religion(s) versus the Cross of Christ, all this and more awaits you my dear readers. 4 stars

Historical Fiction reviews  has been selected by our panelist as one of the Top 100 Fiction Blogs on the web.
http://blog.feedspot.com/fiction_blogs/