The fight for vengeance has no victors…

The great warrior, Einar Unnsson, wants revenge. His mother’s assassin has stolen her severed head and Einar is hungry for his blood. Only one thing holds him back. He is a newly sworn in Wolf Coat, and must accompany them on their latest quest.

The Wolf Coats are a band of fearsome bloodthirsty warriors, who roam the seas, killing any enemies who get in their way. Now they’re determined to destroy their biggest enemy, King Eirik, as he attempts to take the throne of Norway.

Yet, for Einar, the urge to return to Iceland is growing every day. Only there, in his homeland, can he avenge his mother and salve his grief. But what Einar doesn’t know is that this is where an old enemy lurks, and his thirst for vengeance equals Einar’s…

At the risk of sounding blown away, let me say this: I was blown away by this episode of The Whale Road Chronicles. In fact there are a few characters who are also blown away, but I can say naught about that. Einar is Hel bent on revenge against Thorfinn Skull Cleaver, and this sets off an amazing array of activity. That’s one of the things that fuels this tale, there’s a lot going on from a lot of different sources. Never a dull moment in this one my peeps and fellow readers. Crisp action, the gamut of emotions, entertaining dialogue, and a host of interesting characters from kings to thralls worshipping Christ in the bowels of the earth make this a hard to put down tale. Looking forward to more from Einar.

Tim Hodkinson was born in 1971 in Northern Ireland. He studied Medieval English and Old Norse Literature at University with a subsidiary in Medieval European History. He has been writing all his life and has a strong interest in the historical, the mystical and the mysterious. After spending several happy years living in New Hampshire, USA, he has now returned to life in Northern Ireland with his wife Trudy and three lovely daughters in a village called Moira.

Tim is currently working on a series of viking novels for Ares Fiction, an imprint of Head of Zeus. 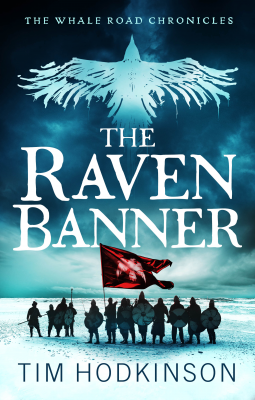 Einar Unnsson will be a great warrior, whether he wants it or not.

Einar Unnssonis destined to be a great Icelandic warrior. He has already defeated the men sent to kill him by his notorious father, Jarl Thorfinn, the ‘Skull Cleaver’ of Orkney. He has a gift that makes him lethal in battle. Yet he has cast it all off to be a bard.

When three men attack him, Einar’s poetry provides little protection. Luckily, the skilled archer and Norse-Irish princess Affreca saves him. She’d assumed Einar had left to raise an army, challenge Thorfinn and seize the Jarldom of Orkney. Now she’s determined to set him back onto his rightful path.

Einar soon finds himself entangled on Affreca’s own mission. She’s seeking the Raven Banner for King Eirik. Legend has it that the banner is imbued with powerful magic. That it was a gift from the Norse God Odin and any army that marches behind it will be victorious. The quest sets events in motion that are beyond Einar’s control.

‘An excellently writtenpage-turner, with a feel for the period which invites you into the era and keeps you there’ Historical Writers Association.

‘A gripping action adventurelike the sagas of old; and once finished, you just want to go back and read it all over again’ Melisende’s Library.

Einar would rather sing about the adventures, not be a participant in them, but such is not his wyrd; his fate. A captivating sequel to Odin’s Game, The Raven Banner is a roller coaster ride of a tale. Einar and his companions are put through some pretty hair-raising events (not the least to Affreca  🙂 ).  An adrenaline rushing, page turning, tale of the turbulent times of Aethelstan – Hakon –  Eirik Blood Axe. The characters are full of the times, the experiences, the lore and legends of the many peoples looking to call Britain their home. I am looking forward to the next installment – this is indeed a series to lose oneself in. 4⭐⭐⭐⭐

It is 954 A.D. and a tempest is brewing in the North. Twenty summers before, Hakon Haraldsson wrested Norway’s throne from his murderous brother, Erik Bloodaxe, but he failed to rid himself of Erik’s family. Now the sons of Erik have come to reclaim Erik’s realm and avenge the wrong done to their father and their kin.

They do not come alone. With them marches an army of sword-Danes sent by the Danish King, Harald Bluetooth, whose desire to expand his realm is as powerful as the lust for vengeance that pulses in the veins of Erik’s brood.

Like storm-driven waves, the opposing forces collide in War King, the action-packed sequel to God’s Hammer and Raven’s Feast.

Having read and enjoyed the first two books of this trilogy, I was very much looking forward to the finale.  I was not disappointed. This is a tale full of irony, as well as the full force of life in a brutal, and oft confusing time. Hakon had been warned and counseled to kill the sons of Eric Bloodaxe, but he refused to do it, wanting to end the blood feud. Well, that didn’t work out too well, as they came seeking vengeance and glory.

The historical record of Hakon and his struggles to keep his kingdom is sparse, leaving the author with plenty of room to be creative, which he does in a most entertaining fashion. The battles are full of the bluster, the camaraderie, the smells, the screams, the dying, and the glory of victories. The lives of the people, their struggles to survive, the oaths they have sworn, the harsh conditions one finds in the Northland, as well as it’s beauty are perfect backdrops to the cares, happiness, love, and soul searching which permeate Hakon’s life. All in all, a fitting end to the story of an enigmatic Norse King, a man seeking peace in a world where peace is fleeting, and often short-lived.  5 stars

Praise for the Hakon’s Saga

“I was swept up in the action and enthralled by the descriptions of Hakon’s struggle.” -Roundtable Reviews

“I highly recommend this historical fiction novel, both for its entertaining story and historical information.” -Historical Fiction Review-

“A story of war, family, sacrifice, honor … one that keeps your blood pumping and your fingers turning pages rapidly. I can’t wait to dig into the next.” -Goodreads Review

Eric Schumacher was born in Los Angeles in 1968 and currently resides in Santa Barbara, CA with his wife, two children and dog. He is the author of two historical fiction novels, God’s Hammer and its sequel, Raven’s Feast. Both tell the story of the first Christian king of Viking Norway, Hakon Haraldsson, and his struggles to gain and hold the High Seat of his realm.

More information on Eric and his Hakon Sagas can be found on his website. You can also connect with Eric on Twitter, Facebook, Goodreads, and AuthorsDB.