The Viking army is about to face its greatest challenge, the Kingdom of Wessex. King Æthelred and his brother Alfred are determined to wage war to the death.

The Great Viking Army has conquered Northumbria and East Anglia. Two English kingdoms remain independent, Mercia and Wessex. The sons of Ragnar, leaders of the army, must decide which to attack next.

Leif Ormson, once Skald to Ivar the Boneless, has now been made a jarl. He is a reluctant warrior and is grateful and relieved when he is given rich lands in which to live in peace and prosperity.

But the Vikings’ relentless lust for conquest sweeps him and his family into peril and war. As the army marches towards Wessex he wonders if he will again have dealings with Prince Alfred and his dangerous friends.

He wonders if he will even survive.

An epic tale of the great war for England.

A captivating tale of the Saxon versus Dane battle for control of Wessex. Intriguing characters drive this page turning episode, the action is relentless and brutal, the landscape is described in such a way that the reader is drawn into the tale. I especially enjoyed the portrayal of a young Alfred, so unsure of his abilities, yet becomes a force to contend with. Looking forward to the next book in this…Alfred isn’t quite The Great yet. 5 ⭐⭐⭐⭐⭐ 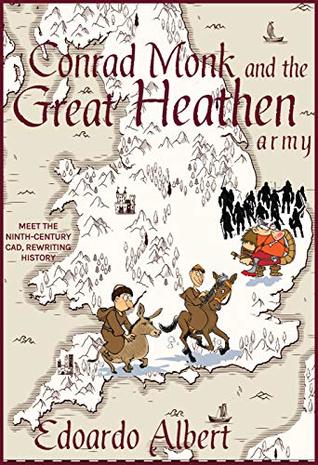 A delightful tale of a rather unusual monk and his attempts to get rich while avoiding the Danish horde that is running roughshod over Britain. Conrad is a schemer, always ready with a plan; which is a good thing as his plans have a way of not going according to plan. His companion, Brother Odo, a very devout monk, unwavering in his faith in God and in Conrad’s plan(s), provides much of the mirth while also provoking sympathy from the reader. The author has crafted an entertaining version of the Danes – the sons of Ragnar; Ivarr, Ubba, and Halfdan – and the eventual clash with Aethelred and Alfred. I particularly enjoy historical-fiction when the historical events are written in such a way that the fictional aspect; the interaction of the fictional characters with the historical, the way that the story is tweaked to allow the reader to think, “Yeah, it could have happened that way.” Conrad Monk and The Great Heathen Army did just that while also sparking periodic chuckles and chortles from this amused reader.  4 stars