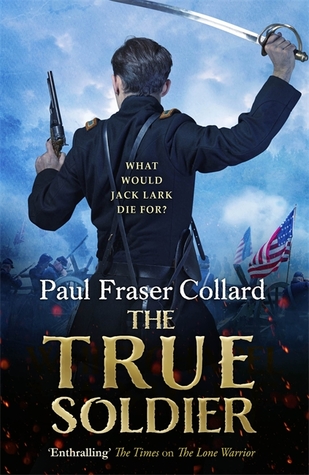 I have followed Jack Lark to many places and events about which I knew very little; The Crimean War, trouble in Persia, revolt in India, Solferino, Italy, and the stews and gin palaces of London.  Now, because of a promise made to a dying man, Jack is in my neck of the woods; Boston, Massachusetts and just in time for a war I do know about; The Civil War.  Through the influence of the father of the dying man, Jack becomes not only a sergeant in the army, but also the protector of the dying man’s brother. You could say that Jack is less than under whelmed by the readiness and experience of this newly formed unit, and in his own lovable brusque manner attempts to make that point. You could say that his new comrades are less than enthused by his doom and gloom attitude. The author has crafted an engaging tale focusing on the early days of the war with all the pomp and ceremony as the crowds cheer their sons, husbands, fathers, and sweethearts onto what they all believe will be a short, victorious campaign. He has also presented those early days in a well researched manner; I especially enjoyed the riot in Baltimore. It’s not one of those familiar bits of the era and the author portrays it in admirable fashion. Along with that and the 1st Battle of Bull Run the reader is brought into the action in all it’s sound and fury. Jack, at times not knowing what to do with his life, rediscovers the plain facts; he can lead men into that maw of death and destruction, and he can still become a perpetrator of that death and destruction. A marvelous tale indeed with well rounded characters, entertaining plots, and the promise of more Jack to come.