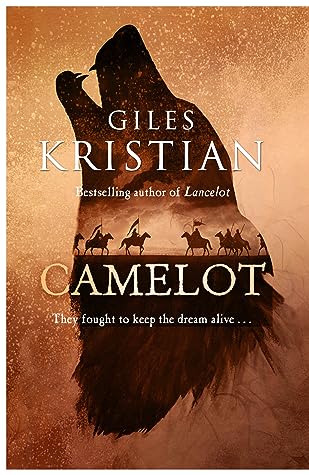 Britain is a land riven by anarchy, slaughter, famine, filth and darkness. Its armies are destroyed, its heroes dead, or missing. Arthur and Lancelot fell in the last great battle and Merlin has not been these past ten years. But in a small, isolated monastery in the west of England, a young boy is suddenly plucked from his simple existence by the ageing warrior, Gawain. It seems he must come to terms with his legacy and fate as the son of the most celebrated yet most infamous of Arthur’s warriors: Lancelot. For this is the story of Galahad, Lancelot’s son – the reluctant warrior who dared to keep the dream of Camelot alive

In this emotionally taut follow up to Lancelot, the author has taken the Arthurian saga/epic/myth a step further; a certified page turning tale that immerses the reader into that darkest of dark periods in Britain’s history. Wonderfully crafted characters, imaginative plot lines full of surprises, a drama played out in heartrending, and visceral fashion…The Horse Lords of Arthur reemerge from fen and forest, proud, loyal to the death…Merlin rediscovers the gods…the lament of Arthur/Lancelot/Guinevere rekindled in Galahad and Iselle…yes my fellow readers, the follow up is an excellent continuation of Lancelot. Take the advice from this humble scribe as sung by The Moody Blues: Are you sitting comfortably? Let Merlin cast his spell.  5 ⭐⭐⭐⭐⭐

Come and join Sigurd, Raven and the rest on the Sword-Norse cruise line as they journey to new lands and exciting adventures.  Go a viking and see the world.

And what a journey it is!  At the end of book two, Sons of Thunder, Sigurd and his flotilla of four ships have escaped the wrath of the Franks and Karolus.  They head southwest skirting the coast of northern Frankia, around the Iberian Peninsula, with a short stop for a raid, and into the Mediterranean.  One more profitable raid, a layover for the winter and then they’re sailing up the Tiber for a visit to Rome.  At this point I am going to have to be careful…don’t want to spoil anything.  Suffice to stay that their stay in Rome is full of adventure and surprises; not only in what they do but in who they meet.  Eventually they arrive at Miklagard(Constantinople) where the action really heats up.  The climatic scenes that brings their quest to fruition are tense filled page turners.  But wait, there’s more after that.  The ending chapters tie up a loose end that has been with us since book 1 and the author does not disappoint in the telling.

As in the first two books of the Raven series, I was mightily impressed with the authors descriptive powers and I’m not just talking about the battle scenes which are well done indeed.  One example:  “White sails were everywhere, and it was a hard thing not to wriggle into brynjas, put men and axes at the prows, and see what we could pilfer. Bothvar said it was like laying a slab of meat before a hound and telling it not to lick its lips, and he was right, for patience in a raiding man is as rare as a happy marriage. Even if he tries to cling to it, it almost always proves as fleeting as a belch.”  Over and over again the author draws word pictures that kindle the readers imagination and breathes life into the many tales this story has to tell.  I was impressed with book 1, enthralled with book 2 and mesmerized by book 3.  So as Raven tells his listeners in the prologue, ” Take the whale’s road and see something of the world. Stand at the prow and feel the salt spray on your faces. I am telling you, it is the best feeling you will ever have.”  5 of 5 stars for this wonderful end to an amazing series.

It was only a few pages into the first book of this series that I knew I would be reading the second one, Raven Sons of Thunder; an excellent decision.  Once again the author has crafted a superb tale of Sigurd the Lucky and his Sword Norse wolf pack.  In this installment, Raven, Sigurd and the rest of the crew have their sights set on making a deal with the King of the Franks, Karolus/Charlemagne, by selling him a valuable Christian relic that will make them richer than they can imagine.  This requires them to journey deep into the kingdom of The Franks, a perilous undertaking given the pervading atmosphere of fear and hatred between the followers of The White Christ and the heathen Norse.

The story is replete with fierce action scenes filled with the brutality fueled by bigotry and the remorseless seeking of revenge.  The author’s descriptive powers are on full display throughout the adventure not only in the battles fought but also in the many scenes depicting life in 9th century France.  I was particularly amused by one scene that takes place in a tavern in which a Christian monk is hearing confessions from a couple English warriors who are now in the service of Sigurd.  While confessing their sins, a couple bare breasted whores are doing their utmost to tempt the newly absolved warriors.  Made me chuckle at the ironic nature of the situation.

The climatic ending of the story kept me up past my normal bedtime but it was worth the loss of sleep and certainly whetted my appetite for book 3, Odin’s Wolves.  So sally forth with Raven and Sigurd and enjoy the journey.

I was seven years old when the Kirk Douglas-Tony Curtis movie “The Vikings” came out.  Like their later collaboration in “Spartacus”, the movie was flawed historically but that didn’t matter to a seven year old.  I was enthralled with the film and the lore of the Vikings.  In this first book in a series Giles Kristian has awakened that feeling of being enthralled albeit on a much more real and visceral scale.  The setting is Britain’s east coast, Wessex and Mercia and the main character is a young man who has no memory of his early life.  The village he resides in is visited by a group of Sword-Norse and because of his permanently blood-shot eye is saved from death…the Jarl Sigurd recognizes the hand of Odin in the boy.  The action throughout this tale is filled with intrigue, treachery, greed  and the fierceness one would expect from a Norse wolfpack.  The Sword-Norse relish in their warrior ethic, their self reliance, and their devotion to the old gods.  The English with their settled ways and their White Christ religion are not only ripe targets but at times also partners and uneasy allies.

One of the more poignant moments as the English confront Sigurd and his band after a bout of treachery in the Englishman’s hall is the stark reality of what religion can do.  I quote the English lord’s part of the conversation:

but hatred of your kind is planted in us at our mother’s tit.  Our churchmen nurture that hatred and it grows strong…for my own part I wonder at the inconsistency of a god of peace who commands us to kill other men, even unbelievers…we  might wonder how much is God’s will and how much of it is our own

Indeed I was captured throughout the book by the author’s descriptiveness whether it was a scene of bloody, gory battle or the beauty of the English countryside.  For example:

We tramped through meadows where white lady’s-smock grew so thick that it looked like a mantle of fresh snow and crossed fields where knapweed and marsh bedstraw were losing their heads to grazing sheep.

I can say for a certainty that I will be reading the other books in this series.  Giles Kristian has awakened my interest keenly and I am grateful for that.