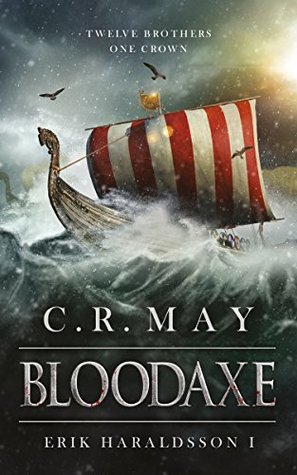 An exhilarating start to a new series, Bloodaxe follows the early life of Eric Haraldsson, the favored son of Harald Fairhair, King of Norway. Favored son or not, the path to true acceptance as rightful heir is strewn with Fairhair’s bastard progeny. Honing his skills as a warrior and a leader of men, and enriching himself and crew by raiding villages and churches, Eric returns to his homeland ready to rule. What follows is a stirring rendition of revenge for wrongs done in the past, and making war on half-brothers who dare to resist. Through the telling of this tale I felt myself relishing in the spray of the sea as Eric’s warship plowed from one adventure to the next. Eric Bloodaxe, as the name implies, is a character true to his time, and is not hesitant to deal out death. however, the author has endowed him with a depth that complements that warrior instinct with a clarity of purpose, and a will to succeed. Looking forward to the next chapter. 4 stars

An interesting tale of the first Christian King in Norway, Hakon, a son of King Harald.  Sent to England as a young boy to be fostered by King Aethelstan, he is weened off the old gods and when he returns to claim his kingdom, he comes as a baptized and committed Christian.  As you can well imagine that presents some challenges as Hakon strives to garner support for his rise to power.  The author’s depiction of the young, naive and certainly impetuous Hakon, who is thrust into the mayhem of war and the strictures of the old gods, is well done.  The story flows nicely and gives the reader a chance to experience life in a time and place that is full of conflict; not only for the throne but also the clash between Odin and the White Christ.  Old ways die hard and that is certainly the case in this intriguing story; one that will continue in book 2, Raven’s Feast.  4.3 stars