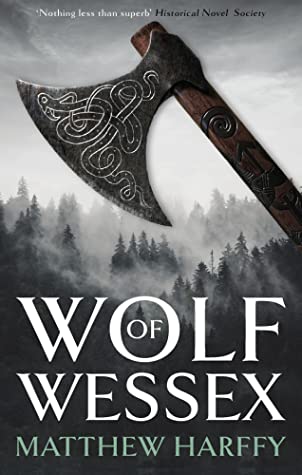 AD 838. Deep in the forests of Wessex, Dunston’s solitary existence is shattered when he stumbles on a mutilated corpse.

Accused of the murder, Dunston must clear his name and keep the dead man’s daughter alive in the face of savage pursuers desperate to prevent a terrible secret from being revealed.

Rushing headlong through Wessex, Dunston will need to use all the skills of survival garnered from a lifetime in the wilderness. And if he has any hope of victory against the implacable enemies on their trail, he must confront his long-buried past – becoming the man he once was and embracing traits he had promised he would never return to. The Wolf of Wessex must hunt again; honour and duty demand it.

By the author’s own admission, this tale was partly inspired by the Charles Portis novel, True Grit. There’s a scene in Wolf of Wessex, where the protagonist, Dunston, an aging warrior of some distinction, is alone facing ten mounted foes…the verbal give and take reminded me of Lucky Ned Pepper and Rooster Cogburn to wit: Lucky Ned – I call that bold talk for a one-eyed fat man.  Rooster – Well fill your hands you son of a bitch. The ensuing battle in Wolf is just one of the many edge of the seat encounters Dunston faces in this gripping tale of remembrance, honor bound fortitude, and yes grit. While this story does have its share of gruesome events, the periods when Dunston and Aedwyn enjoy even a brief peaceful rest, bring a nice counterbalance to the violence they follow; e.g. teaching the young girl how to track and read sign. Reaching into the history of Wessex prior to Alfred, the author has created a convincing tale that is rather hard to put down.  5 ⭐⭐⭐⭐⭐