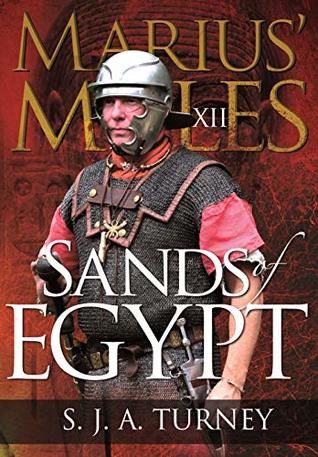 Winter, 48 BC. Caesar and his small force are trapped in the Egyptian city of Alexandria. Caught up in the dynastic struggles of the House of Ptolemy, the consul has sided with the clever and ruthless Queen Cleopatra. Her brother and fellow monarch Ptolemy XIII languishes in the palace, a hostage of Caesar’s, while a huge army under the command of the Egyptian general Achillas closes on the city to free him.

With both the future of this ancient land and the safety of Caesar and his men at stake, Fronto and his friends face the terrible task of holding an unfamiliar city under siege, in the desperate hope that reinforcements will reach them before the enemy break in.

But Egyptian reinforcements gather too, and with the interference of the youngest princess, Arsinoë, the future is far from written. Trapped, besieged and outnumbered, time is running out for the Romans, as shadows loom across the sands of Egypt

As this is the 12th episode in this magnificent saga, I am going to presume that anyone reading this review is familiar with Marius Mules, and will gloss over the salient points usually covered in my reviews…such as character development, plot, etc etc, mind you all of the usual salient points are done in the usual excellent SJA manner. 😊 Instead, I will state only that Marius Mules would be a must see TV event on par with I, Claudius or ROME.

I will say this about #12…the building tension between Caesar and Cassius and the looming decisions Fronto will be faced with…man oh man, 13-15…I can’t wait.  😎