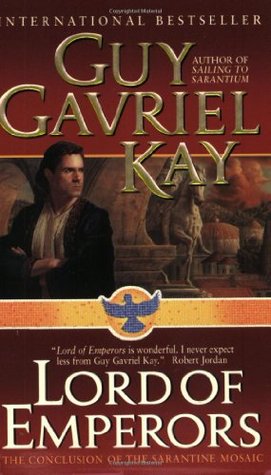 Beckoned by the Emperor Valerius, Crispin, a renowned mosaicist, has arrived in the fabled city of Sarantium. Here he seeks to fulfill his artistic ambitions and his destiny high upon a dome that will become the emperor’s magnificent sanctuary and legacy.

But the beauty and solitude of his work cannot protect his from Sarantium’s intrigue. Beneath him the city swirls with rumors of war and conspiracy, while otherworldly fires mysteriously flicker and disappear in the streets at night. Valerius is looking west to Crispin’s homeland to reunite an Empire — a plan that may have dire consequences for the loved ones Crispin left behind.

In Sarantium, however, loyalty is always complex, for Crispin’s fate has become entwined with that of Valerius and his Empress, as well as Queen Gisel, his own monarch exiled in Sarantium herself. And now another voyager — this time from the east — has arrived, a physician determined to make his mark amid the shifting, treacherous currents of passion and violence that will determine the empire’s fate.

An intricate tale, as I have come to expect from Mr. Kay, full of interwoven strands, ironic circumstances, and an amazing array of characters. The full range of personalities, ambitions, hopes and dreams permeate the pages beckoning the reader into the very souls of the players. Take it from this humble scribe, but Holy Jad, Guy Gavriel Kay can sure spin a yarn.  5 Stars 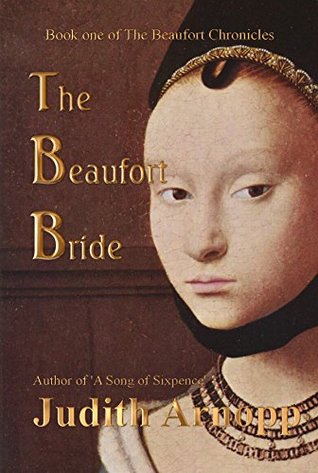 As King Henry VI slips into insanity and the realm of England teeters on the brink of civil war, a child is married to the mad king’s brother. Edmund Tudor, Earl of Richmond, takes his child bride into Wales where she discovers a land of strife and strangers.
At Caldicot Castle and Lamphey Palace Margaret must put aside childhood, acquire the dignity of a Countess and, despite her tender years, produce Richmond with a son and heir.
While Edmund battles to restore the king’s peace, Margaret quietly supports his quest; but it is a quest fraught with danger.
As the friction between York and Lancaster intensifies 14-year-old Margaret, now widowed, turns for protection to her brother-in-law, Jasper Tudor. At his stronghold in Pembroke, two months after her husband’s death, Margaret gives birth to a son whom she names Henry, after her cousin the king.
Margaret is small of stature but her tiny frame conceals a fierce and loyal heart and a determination that will not falter until her son’s destiny as the king of England is secured.
The Beaufort Bride traces Margaret’s early years from her nursery days at Bletsoe Castle to the birth of her only son in 1457 at Pembroke Castle. Her story continues in Book Two: The Beaufort Woman.

Growing up in America, my education did not include learning too much about British kings, the exception being George III, and perhaps Alfred. The Tudors were not common fare for our  history books notwithstanding Henry VIII and his six wives, a failing that I have remedied the last few years through historical-fiction novels (and the subsequent research those tales inspire.) The story of Margaret Beaufort, mother of Henry VII, is poignantly told in The Beaufort Bride. She lived in an age when girls of the noble classes were often deprived of any control over their lives, subjected to an unknown future with a husband they may have never met. The author does a superb job rendering that fear, that uncertainty, that determination to survive in the character of a 13 year old girl, a pawn in the game of courtly politics. In an easy flowing narrative, we follow the life of Margaret as she comes to grips with her lot in life and the circumstances that place her and her child in the dangerous world of royal succession. I was captivated by this seemingly powerless, and fragile child as she struggled and succeeded to make the best of her situation, and the despair she felt when that situation was shattered.

I enjoy the heck out of books that keep me turning the pages long after the time I’ve allotted for reading, and this is one of those. Looking forward to continuing Margaret’s story. 4 stars 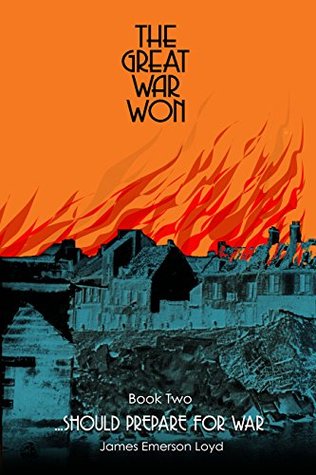 1918: The Great War, as it was already known, had reached an inflection point. The course of the war and the future of European civilization now rested on one decision: Would Germany, having prevailed in the East against a Russia crumbling into revolution and chaos, now attempt to crush her British and French foes in one last desperate offensive before the emergent American Army arrives in its overwhelming force?

Or could a small band of patriotic Germans led by a Crown Prince and a General use high position and influence to persuade their unyielding leadership to simply declare victory and withdraw homeward, leaving their opponents to justify a continuing and increasingly senseless slaughter?

Who Desires Peace…, the first book in The Great War Won trilogy, chronicled the schemes and adventures of the conspirators laying the foundations of their peace offensive. In this Book Two, …Should Prepare for War, their story begins with the historic peace negotiations with Leon Trotsky and the new government of Bolshevik Russia, followed by the unleashing of Germany’s armies as those talks fail. An unexpected plea for help propels a German team into the heart of Saint Petersburg in search of an imprisoned American notable, then several calls for a peaceful resolution to the war prove inconclusive, including an intrepid mission to meet face-to-face with the American General Black Jack Pershing.

Finally, the tenuous state of inaction along the Western Front is shattered by first, an unexpected Allied offensive, then a fierce German counterattack stopped only by the extraordinary courage and vigor of the new American Expeditionary Force at Chateau Thierry and Belleau Wood, setting the stage for the final showdown between Germany and America in Book Three, A Power of Recognized Superiority.

A thoroughly engaging look at WW1, book 2 of the series continues the exploits of the fictional General von Treptow and his attempts to bring the war to an end. As in the first book, I was taken in by the number of events that take place, the plots and subplots that drive the narrative…but what good are those story lines without interesting characters to make those events happen…what good are those interesting characters without believable dialogue? Well my peeps and fellow travelers, you need not fret over those aspects of the story. The characters are lifelike, some even larger than life…the dialogue is full of the sharp repartee, the clever retort, the belligerent espousing of opinion…an example – a meeting of David Lloyd George, Churchill, and Teddy Roosevelt (and others):

“thoroughly pissed Prime Minister rose to depart. “Well, then, perhaps not the King today. Arthur, Henry, we shall take our leave. Thank you, Lord Elsmere, for your hospitality. Winston, I should very much like to see you at Number Ten. Four this afternoon. Arthur, please see to your Dutch colleague. Good day, Colonel Roosevelt.” As the Englishmen trooped out, Balfour gave a shrug with his backward glance. Roosevelt turned to Churchill, “Winston, was it something I said?”

An excellent sequel that will keep you turning the pages (or swiping your Kindle). Intrigue, adventure, danger, and even love await you amidst the turmoil of a cataclysmic world changing event. 5 stars

A MODEST INDEPENDENCE
BY MIMI MATTHEWS

Attorney Tom Finchley has spent his life using his devious intellect to solve the problems of others. As for his own problems, they’re nothing that a bit of calculated vengeance can’t remedy. But that’s all over now. He’s finally ready to put the past behind him and settle down to a quiet, uncomplicated life. If only he could find an equally uncomplicated woman.

Former lady’s companion Jenny Holloway has just been given a modest independence. Now, all she wants is a bit of adventure. A chance to see the world and experience life far outside the restrictive limits of Victorian England. If she can discover the fate of the missing Earl of Castleton while she’s at it, so much the better.

From the gaslit streets of London to the lush tea gardens of colonial India, Jenny and Tom embark on an epic quest—and an equally epic romance. But even at the farthest edges of the British Empire, the past has a way of catching up with you…

Mimi Matthews (A Victorian Lady’s Guide to Fashion and Beauty, The Lost Letter) writes both historical non-fiction and traditional historical romances set in Victorian England. Her articles on nineteenth century history have been published on various academic and history sites, including the Victorian Web and the Journal of Victorian Culture, and are also syndicated weekly at BUST Magazine. In her other life, Mimi is an attorney. She resides in California with her family, which includes an Andalusian dressage horse, two Shelties, and two Siamese cats.

Pick up THE MATRIMONIAL ADVERTISEMENT by @MimiMatthewsEsq for only $.99 on #kindle! https://amzn.to/2B5AFhy
“For this impressive Victorian romance, Matthews crafts a tale that sparkles with chemistry…an excellent series launch” -Publishers Weekly
#historicalromance #ebooks

Late fifth century Britannia recoils in shock at the murder of charismatic High King, Ambrosius Aurelianus, and looks to his brother and successor, Uther, to continue his work in leading the resistance to barbarian invaders. Uther’s destiny as a warrior king seems set until his world is turned on its head when his burning desire to possess the beautiful Ygerne leads to conflict. Could the fate of his kingdom hang in the balance as a consequence?

Court healer and schemer, Merlyn, sees an opportunity in Uther’s lustful obsession to fulfil the prophetic visions that guide him. He is encouraged on his mission by druids who align their desire for a return to ancient ways with his urge to protect the one destined to save the Britons from invaders and lead them to a time of peace and prosperity. Merlyn must use his wisdom and guile to thwart the machinations of an enemy intent on foiling his plans.

Meanwhile, Saxon chiefs Octa and Ælla have their own plans for seizing the island of Britannia and forging a new colony of Germanic tribes. Can Uther rise above his family problems and raise an army to oppose them?

Book three in A Light in the Dark Ages series, Uther’s Destiny is an historical fiction novel set in the Fifth Century – a time of myths and legends that builds to the greatest legend of all – King Arthur and his knights.

This book is preceded in the series by Abandoned (book one) and Ambrosius: Last of the Romans (book two).

Most of the Arthurian tales I read when I was younger, such as The Crystal Cave series by Mary Stewart (which I thought was magnificent), or saw via movies or TV (Richard Harris’ Camelot), dwelt on the mythical for the most part. Uther’s Destiny while it is certainly comprised of those mythical bits, it is also a stark look at post-Roman Britain; the vacuum left with the departure of the legions, and the very real danger of being overrun by the Angles/Saxons/Jutes etc who rushed in to fill that vacuum.  The author’s portrayal of Uther; a complicated man firmly rooted in the 5th century, a king weighed down with the prospect of losing Britain to the invaders, but also a king with the smarts and tenacity to succeed. Indeed, the characters in this tale from Merlyn, to the proud knights, the scheming Morganna, and the treacherous Pascent all do their part to make this an enjoyable read. Also woven into the plot is the inevitable clash of the old religion with Christianity and Uther’s juggling of the two as needed. So, dear reader, immerse yourself in The Dark Ages, and prepare for the enlightenment to come in the person of Artorious.  4 stars